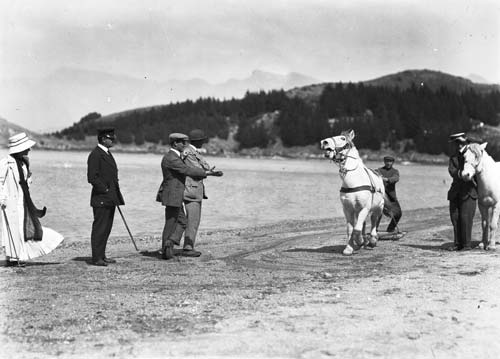 English explorer Robert Falcon Scott had family connections and friends in Christchurch, and so his Antarctic expeditions of 1901–4 and 1910–12 used Lyttelton as a base. For the second expedition, Scott had 20 Siberian ponies and 34 sledge dogs brought out to Lyttelton and quarantined at Quail Island. The ponies did not adapt to Antarctic conditions and died or were shot during the ill-fated expedition.

Hi from Uk ! I have a private album of the visit to Quail Is. also, with Scott etc watching the DOGS being trained pulling sledges on dirt tracks ! I am in process of publishing an a/c of this Exped. showing a lot of previously unpub.material. If you want a copy at some stage, or just the photos , let me know. regards TREVOR CORNFORD Esq., FRGS, PS The last Exped. was actually to 1913 when they finally returned.