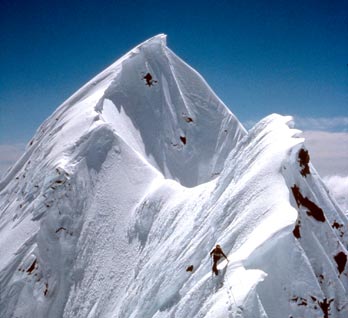 Since the late 19th century, adventurers have been drawn to the treacherous terrain of the Southern Alps, and to volcanic Taranaki and Ruapehu. Today’s climbers may use skiplanes and high-tech gear, but reaching a summit is still as exhilarating as it was in the days of packhorses and canvas tents.

New Zealand’s main mountaineering areas are in the South Island, especially the Southern Alps. The North Island has Mt Taranaki and Mt Ruapehu.

Mountains were sacred to Māori. This prevented them climbing the peaks.

Europeans began exploring in the 1800s. In 1839 James Bidwill climbed Mt Ngāuruhoe, and in 1855 Maria Atkinson made the first major climb by a woman – to the top of Taranaki.

Aoraki/Mt Cook in the Southern Alps is New Zealand’s highest peak, at 3,724 metres. In 1894 a group of New Zealand climbers wanted to beat an Englishman to the top, and on Christmas Day they did. By 1955, there had been 100 ascents of Aoraki/Mt Cook. Many climbers have died on the mountain.

In 1895 the government bought the Hermitage hotel, near Aoraki/Mt Cook, and employed mountaineers to be alpine guides there. They took serious climbers into the Southern Alps, cutting steps in the ice. With a guide, Australian Freda Du Faur became the first woman to climb Aoraki/Mt Cook.

At this time, mountaineers used ice-axes, hemp ropes and goggles. They had canvas tents and sometimes used horses to carry their equipment and supplies. Food included beans, rice, bacon and dried fruit.

During the 1930s many young people began mountaineering. They did not take guides to cut steps for them. Instead they used crampons – spikes on their boots that stopped them slipping on ice. After the Second World War, equipment such as ice screws, nylon ropes and lightweight stoves made climbing quicker and easier.

By the 1950s all the difficult ridges of major peaks had been climbed. The next challenge was climbing faces – the slopes below ridges, which are harder to climb because they are so steep. One of the toughest was Aoraki/Mt Cook’s Caroline Face, first climbed in 1970.