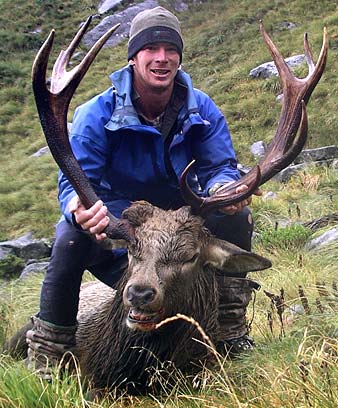 ‘Stones rattled behind me and I spun round to see another stag, a monster … His antlers looked enormous against the background of bush … The deer I’d been waiting for, for three-and-a-half years!’ Barry Crump’s 1960 classic A good keen man captured the spirit of the rugged deer-culling life. The thrill of the hunt still draws trophy seekers to the New Zealand bush.

In 19th-century Britain and Europe, wealthy people liked to go into the countryside and shoot game (wild animals such as deer, pigs and rabbits). They ate the meat, and displayed deer antlers as trophies.

When British settlers arrived in New Zealand, they found there were few animals suitable for hunting. So from the 1850s they shipped in deer and other animals, releasing them in the forests and the mountains.

New Zealand’s wild deer live in the bush, hills and mountains. The most common species is the red deer, which soon spread around the country. Other species include sika and fallow deer.

Also hunted for sport were:

Today hunters still head for the mountains in autumn, which is the time of ‘the roar’. This is the mating season, when many stags (male deer) have splendid antlers. The stags roar at each other and fight over the hinds (female deer). Hunters compete for the best antler trophies, using guns with telescopic sights.

Safety is vital, as sometimes hunters shoot each other by mistake, thinking they have seen a deer.

By the 1930s there were millions of deer, which were destroying native plants and trees and causing erosion. The government decided to reduce their numbers. Hunters known as deer cullers worked in remote areas, living in huts and shooting deer. By 1954 more than a million deer had been killed. Later, hunters shot them from helicopters – sometimes 300 deer a day. Government deer culling stopped in the 1980s, but recreational hunters help keep the numbers down.

Wild pigs were hunted by Māori and Europeans, and today there are at least 25,000 pig hunters in New Zealand. It can be a dangerous sport. If a wild boar (male pig) is injured or angry it can attack and cause serious harm with its tusks. Hunters use dogs to find and hold a pig, and a rifle to shoot it or a knife to ‘stick’ it in the neck to kill it.