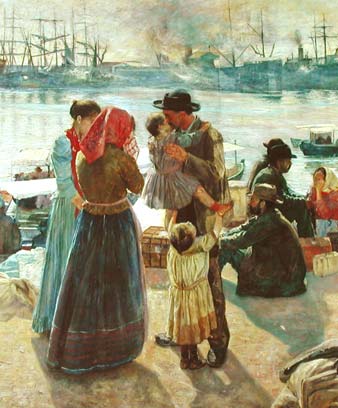 One 19th-century promoter of Italian immigration pointed out that New Zealand ‘bears a striking resemblance to … Italy, turned upside down with the foot end facing up’. Links were forged between the two countries when, during the late 1800s, Italians left a life of poverty and hardship to look for ‘la bella fortuna’. Migration chains led from rural Italy to several locations in New Zealand, where communities formed on the basis of work and kinship.

Te āhua nui: Painting of emigrant families on a dock in southern Italy

In the 100 years after 1870, the emigration of the Italian people was one of the greatest movements from a single country in modern history. Poverty, local wars, a lack of farmable land and bleak prospects drove up to 300,000 a year to seek a better life in new lands.

Those who came to New Zealand often did so by chance, or after their luck had failed in Australia.

The gold rushes of the 1860s attracted a small group to Central Otago, where they worked at a site named the Garibaldi Diggings.

The New Zealand government’s attempt at organised Italian immigration in the 1870s was a disaster. The Italians who were chosen to come out were not manual labourers, but they were sent to do hard physical work. Many decided to find other jobs.

Migration was most successful when trails led from rural Italy to small settlements in New Zealand, based on family and work. A number of important communities developed from these migration chains:

Population since the Second World War

A small but steady flow of immigrants has arrived since the Second World War. Now, Italians have moved away from agriculture or fishing, to work in the professions or set up businesses. This meant that most lived in the major urban centres.

When Italians left their homeland for a new life, their hopes, skills and family bonds sustained them. These values are still central, but life is less traditional. And while the early immigrants worked hard to produce their own wine, pasta, plum tomatoes, capsicums and other food, today Italian cuisine and ingredients are readily available and enjoyed by most New Zealanders.