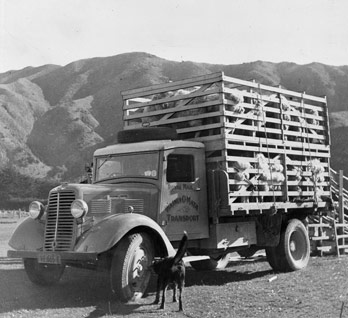 Livestock trucks are a common sight on New Zealand roads, carrying sheep, cattle and deer to saleyards, farms or freezing works. On back roads, farmers still move the odd mob ‘on the hoof’. Stock have been transported around New Zealand since farming began here – by boat, rail and road, or on foot.

One more river to cross

Since farming began in New Zealand, stock have needed to be moved around to sales, freezing works and farms.

Sheep and cattle were brought to New Zealand on sailing ships from Britain and Australia in the 19th century. The seas were often rough, and the voyages sometimes took more than 100 days. Many animals died.

Before roads and railways were built, fleets of boats working around New Zealand’s coastline were vital for moving stock around the coasts, up rivers and across Cook Strait.

Since the 1860s, live animals have been exported by ship – today, mainly to the Middle East. Specially designed ships can carry more than 130,000 sheep or 25,000 cattle.

Before trucks and trains, the only way to move stock from one place to another was on foot (droving). It was tough work, especially in mountainous areas. Crossing rivers was also a challenge.

Long droves could last up to two or three months. Animals (mostly cattle) were bought in one area and travelled slowly to another place, feeding on the grass on the side of the road.

Today droving is much less common.

Once railway lines were built, stock were transported by train to ports, freezing works, sales and farms. In the 1950s the number of animals carried by rail began to decline, and in the early 2000s very few were moved by train.

At first, laws made it difficult for trucks to compete with the railways. In the 1960s the laws were changed, and more trucks began to carry animals. Over time, trucks have become larger. Stock are carried in removable crates, so the trucks can be used to move other goods as well.