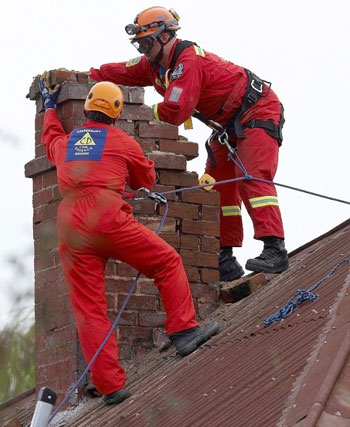 New Zealand’s first organised civil defence was prompted by fears of air raids and poison-gas attacks during the Second World War – and fears of nuclear attack in the 1950s. In the 2000s natural disasters such as floods, landslides, earthquakes and fires were the focus of civil-defence planning and activities.

Te āhua nui: Stabilising a chimney after the 2010 Canterbury earthquake

Early New Zealand communities had to fend for themselves in emergencies. Organised civil defence had its origins in the Emergency Precautions Scheme, set up to deal with possible air raids and poison-gas attacks during the Second World War.

In the 1950s and early 1960s people worried about nuclear attack. A law was passed allowing local authorities to organise rescue and welfare services, and the Ministry of Civil Defence was set up in 1959. Later it became clear that natural hazards such as floods and earthquakes were more of a danger.

Civil-defence plans for local authorities were made compulsory after the severe storm that sank the Wahine ferry in 1968. Committees to co-ordinate emergency services were set up after a 1973 incident when Auckland residents were affected by toxic fumes from leaking storage drums. From 1983 disaster recovery co-ordinators managed remedial work after disasters, which included major floods, the 1987 Bay of Plenty earthquake and Cyclone Bola in 1988. The Ministry of Civil Defence and Emergency Management was set up in 1999.

National and local civil-defence organisations have often been criticised for inefficiency.

From 2002 regional Civil Defence Emergency Management (CDEM) groups were set up, along with emergency and welfare services and necessary utilities such as power companies. Groups had to make plans based on the region’s risks.

The National Crisis Management Centre is located underground at Parliament, and is designed to survive a major earthquake.

A state of national emergency was declared in March 2020, during the early stages of the COVID-19 pandemic.

People are encouraged to prepare for emergencies by storing water and food, organising emergency kits and making plans. In some areas people can subscribe to a text alert system for disaster information.

In an emergency, people may go to a community civil-defence centre. These are based in schools, community centres or marae, and are run by volunteers.

Volunteers can also take part in Urban Search and Rescue (USAR), which finds and rescues people trapped in collapsed buildings or landslides.

Civil-defence exercises have been run since the 1960s to test responses to disaster scenarios.