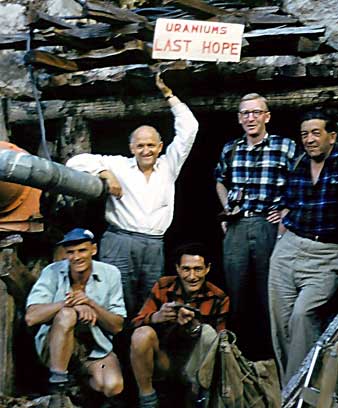 When the Second World War ushered in the atomic age, the race was on to find uranium to make nuclear weapons and fuel nuclear power stations. New Zealand joined the search, and the discovery of uranium deposits on the West Coast in 1955 raised hopes of enormous wealth.

Voyages of the New Golden Hind

Tiny amounts of radioactive minerals are found in most rocks. They give off invisible, high-energy rays or particles. This is known as radiation, which you can detect with a Geiger counter. This device will tick quickly or flash when held close to radiation. The radioactivity is caused by a small number of radioactive elements, especially uranium and thorium.

During the Second World War, the United States and Britain created nuclear weapons using uranium, and the United States dropped the first atomic bomb on Hiroshima, in Japan, in 1945. In the 1950s radioactive elements were used to produce heat for nuclear power stations. Uranium was scarce and valuable, and governments started to search for it – this is known as prospecting.

The New Zealand government began secretly prospecting for uranium in 1944. Scientists searched the country for radioactive rocks, but did not have much success.

In 1954 the government produced a booklet about how to look for radioactive minerals in rocks, and how to make a Geiger counter. Uranium prospecting was promoted as a weekend hobby.

A year later, two elderly men, Frederick Cassin and Charles Jacobsen, were prospecting on the West Coast. One evening they parked their truck near Hawks Crag in the Buller Gorge. Jacobsen had a Geiger counter which began ticking wildly near a rock face. The pair were very excited when their rock samples showed high levels of uranium. Newspapers reported the story around the world. But the men had chanced upon just a few chunks of highly radioactive rock, and other samples contained only small amounts of uranium.

After the Hawks Crag find, the New Zealand and British governments spent thousands of pounds to help mining companies search for uranium in the rugged West Coast valleys. In the 1960s there were also plans to build nuclear power stations in New Zealand, and the search continued. But there was little success.

By 1980 uranium was no longer seen as important. Natural gas had been discovered off Taranaki, and gas turbines took the place of nuclear power stations.