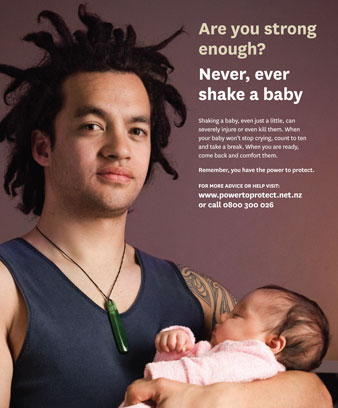 The public attitude to child abuse has altered over the years – in the 19th century a degree of violence was tolerated. In the early 21st century families and neighbours are encouraged to speak out if they witness children being harmed or neglected.

Deaths of children through maltreatment, 1948–2014

Child abuse occurs when parents or caregivers use physical violence on their children, sexually or emotionally abuse or neglect.

Almost half of New Zealand’s abused children are under five years old, and more girls are abused than boys. In 2014/15 there were 150,000 cases of child abuse notified (reported to authorities), and 11% of these led to confirmed cases of abuse, mostly emotional abuse and neglect cases.

Between 1991 and 2000, 91 children died of abuse, most from physical violence. Many victims became widely known, for example Nia Glassie, who died following repeated abuse in 2007.

In the 19th century police and the courts did not want to interfere in family life. If children were badly abused they were sometimes taken from their homes and put in an institution.

From the 1920s it was thought that children should remain in their homes, and parents should be educated to prevent abuse from happening. From the 1970s police, lawyers and medical professionals formed teams to advise social workers about abuse. In 1999 the Department of Child, Youth and Family Services (CYF) was created to look after child welfare.

CYF was replaced by the Ministry for Vulnerable Children (Oranga Tamariki) in April 2017 after an expert group produced a critical review of Child, Youth and Family Services. The agency became Oranga Tamariki – Ministry for Children on 31 October 2017.

The agency is attempting to find new ways of working in collaboration with a range of other organisations and individuals. Oranga Tamariki continues to be the key government agency with responsibility to intervene when child abuse is identified.

At first church organisations and women’s groups helped abused children. Plunket nurses who visited homes could report child abuse. From the 1970s women campaigned to end violence in the home.

From 1989 community groups, iwi (Māori tribes) and Pacific Island groups had contracts with the government to provide care for children and to assist families.

Family members are the most likely to abuse children, and violence and abuse is often passed down in families. If people are poor or live in crowded conditions there is a higher chance of abuse.

Child abuse costs an estimated $2 billion per year, including the cost of health, welfare and corrections services and indirect costs from lost productivity.

Children often do not speak out about abuse because they fear they may not be believed or their family may be broken up. Since the 1970s phone helplines have been a way for victims to ask for help.