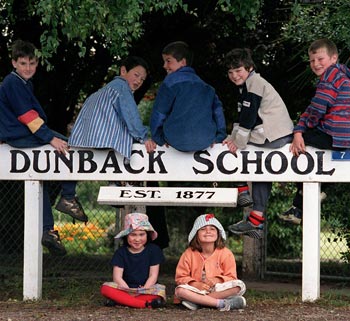 Learning to read and write was once no easy matter for country children. Far from the luxuries of town, they travelled for miles to and from lessons, worked hard on the farm, and often left school by age 12. There are fewer country schools now, but they offer a unique kind of education.

From the 1840s, New Zealand was settled by British and other immigrants, many of whom could not read or write. There was no law saying children had to go to school, and education was not free – only wealthier people could afford it. Many people lived in the country and there were few schools nearby.

Christian missionaries taught some Māori to read and write English. Before 1877, Māori children could attend Native Schools. This system lasted until the 1960s.

This was an important law. All children received free primary education, and they had to attend school.

Country schools often had only one or two classrooms, with one or two teachers. Most students left at age 12 in the 19th and early 20th centuries, but some attended district high schools. Children from wealthier families boarded at town high schools, which usually offered a better education.

Children often walked to school, or rode horses. But they often missed classes in winter when the roads were flooded or muddy. Children also stayed home to help with milking cows, haymaking and other tasks.

Some farm children lived too far away from a school. Since 1922 the Correspondence School has provided lessons for children in remote areas – by mail and on the radio, and now on the internet.

Over the years there have been changes in rural education, including more secondary schools, school buses, a library service, and computers and interactive lessons. Pet day has always been a popular school event – pupils bring lambs, calves and other animals.

The number of country schools has been dropping since the late 1920s. Many schools have closed, and by 2006 only about 8% of all New Zealand pupils were at rural schools.

Pros and cons of country schools

Country schools are small and isolated. Drawbacks include: