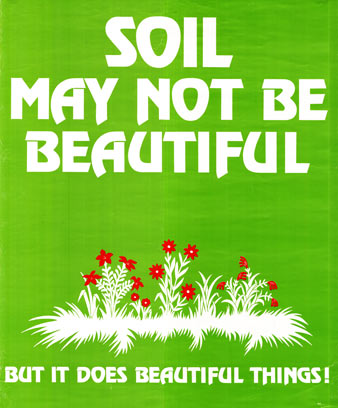 Farming has been the basis of New Zealand’s economy, and soil is the basis of farming. When soil erodes, it makes land less productive, and can lead to floods, slips and damage to infrastructure and property. Methods for controlling erosion include planting trees, stabilising soil and controlling rivers and streams.

Soil isn’t just dirt – it holds many nutrients and organisms. New Zealand’s soil is vital to the farming industry.

What is soil erosion?

Wind, rain, floods, rivers, glaciers and earthquakes all erode (wear away) the land. Soil erosion occurs when soil moves (for example sliding down a slope) to a different place. This may be only a short distance, or carried many kilometres away by rivers.

The two top layers are:

Both can be affected by erosion.

Some types of erosion

Humans have sped up soil erosion. New Zealand’s native forests once protected the soil, and tree roots kept subsoil stable. But settlers burnt the trees and planted pasture for sheep and cattle. Rain and floods began washing away the topsoil. On some hill country, soil slid down the slopes.

In the South Island, farmers burnt tussock and planted pasture. Where bare soil was exposed to wind, frost and rain, the topsoil was easily eroded.

Damage to New Zealand’s hill country and other farmland costs up to $150 million annually.

The settlers brought rabbits, deer, possums, sheep and cattle. The animals ate and trampled plants and trees, exposing the soil to rain and wind.

Where does the soil go?

Since the 1940s, many methods have been used to save the soil and prevent erosion, including: