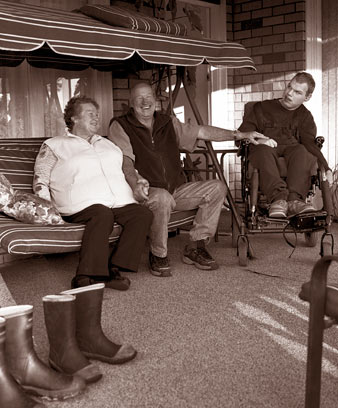 Care work is not limited to childcare – frail older people, disabled or dying people may also need care. From ‘putting away’ mentally disabled people in psychiatric institutions to supporting older people to ‘age in place’, ideas about how best to care have changed.

People may need care if they are children, frail older people, physically or mentally disabled, or dying of a terminal illness. Care can be provided by paid workers at home or outside the home, or by friends or family.

Care of the elderly

In the 19th century elderly people who could not work depended on their families or went to live in places called benevolent institutions. In the 20th century many old people lived in rest homes.

In the 1980s people began to think it was better for old people to keep living in their own homes with services like Meals on Wheels and household help. Only 5% of people over the age of 65 lived in rest homes in 2013.

Care of the dying

In the 19th century, people with terminal diseases were cared for at home. The first modern hospice in New Zealand, the Mary Potter Hospice in Wellington, opened in 1979.

Hospices try to maintain people’s quality of life. At first they took inpatients, but they now also support people living in their own homes.

Care of the disabled

In the 19th century people with mental illness or intellectual disabilities were often ‘put away’ in asylums.

Physically disabled people were more accepted. Some lived in special homes, but often they lived in the community. They did not receive much support until the Disabled Persons Community Welfare Act was passed in 1975.

People also began to be critical of mental institutions at about the same time. Between the 1980s and 2000s, many large mental hospitals closed. Some patients with intellectual disabilities went to live with family. Others lived together as flatmates in supported living environments.

Being an unpaid carer can be stressful. It can affect the caregiver’s career and finances, and their relationships with others. Support services are now provided, including paid short-term care so carers can take a break. Recently it has become possible for some people with disabilities to pay family members who provide care.