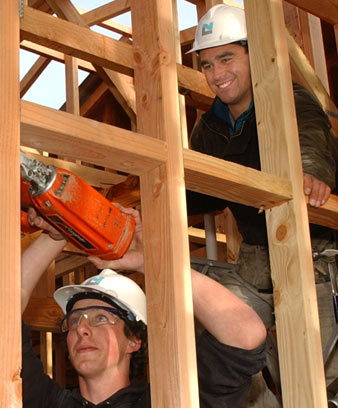 As New Zealand’s towns grew, they needed builders to construct houses, shops and public buildings. While many building firms remained small and family-owned, some grew into large companies with varied interests.

Directions for a stonemason, 1832

Māori built dwellings, marae and pātaka (storehouses) from timber. When European settlement of New Zealand began, builders were needed to construct houses, shops, and public buildings such as post offices, pubs and churches.

Building boomed as towns grew. Most builders worked on contract, but some bought land, then constructed houses and sold them. As suburbs expanded in the 1920s many small building companies were set up – but most went out of business during the 1930s economic depression. After this, the government developed large areas of state housing, providing more work for builders.

Early house-building companies used materials such as kauri timber. In the 1920s costs of labour and timber rose, so simpler houses were designed that were cheaper to build. After the Second World War companies produced prefabricated houses.

When clients want a new house built or alterations done, they get an architect or draughtsperson to draw up a plan. This must be approved by the local council, which sends a building inspector to make sure the work meets the standards in the Building Code. Builders may subcontract work out to other tradespeople such as electricians and plumbers.