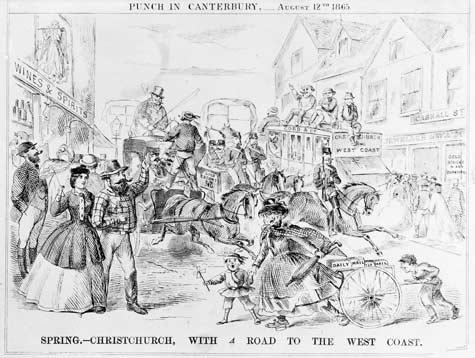 When gold was discovered on the West Coast in 1864, many in Christchurch hoped they would benefit from the gold rush. This 1865 cartoon foresees the benefits for Christchurch if a road from Canterbury to the West Coast goldfields were built. The easiest way to the goldfields was still by sea, but Browning Pass and Arthur’s Pass were alternative routes across the Southern Alps from Canterbury. Browning Pass was very high and steep, so a road across Arthur’s Pass was opened in 1866.