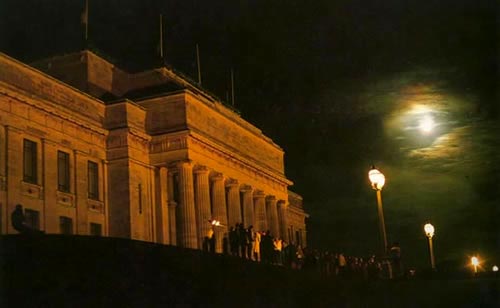 A crowd gathers at the Anzac Day dawn service outside the Auckland War Memorial Museum in 1986. The museum building was funded by public subscription and is sited on Pukekawa Hill in the Auckland Domain. It opened in 1929. The Parthenon style was chosen to symbolise the valour of New Zealand’s war dead. Included in the structure are two halls of memory in which the names of those killed in 20th century wars are recorded. The museum was refurbished and extended in the early 2000s.