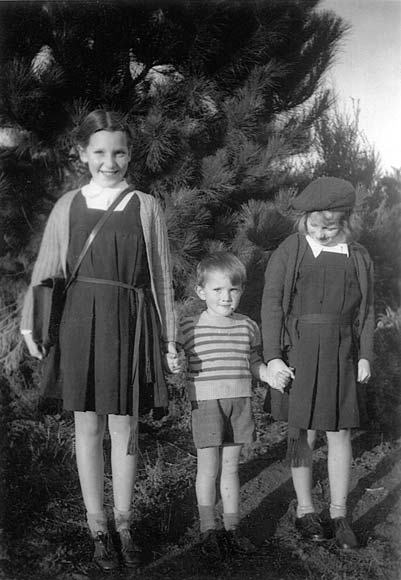 Jocelyn Buckett (later Keith), her brother Rob and sister Lindy pose for the camera at Pinedale in April 1948. Pinedale, situated east of Putaruru, was a thriving timber town in the 1940s.

Pinedale no longer exists. All the houses made of untreated pine have literally, as my father used to say, grown into the ground. So the village where I lived from 1940 to 1948 no longer exists. The timber mill that was the heart of the village was in the hollow between two hills. My father was the mill manager, so we lived on one hill and everyone else lived in the village on the other hill. The mill office was on the left side across from the mill, and the railway line ran from Rotorua to Putaruru on the far side of the mill, past the smouldering sawdust heap and the skids.

When I began school in 1943 there was a debate in the family about whether I was going to Putaruru School or doing correspondence lessons at home with my mother and sister. The stumbling block was transport – the train or the bus. The train was close by, the bus at the far end of the village. Schoolchildren travelled in the guards’ van. The previous stop was at the pā so the guards’ van was full of Māori children. Māori was the language of the guards’ van, but was forbidden at school. For a nervous little five-year-old Pākehā child, without word of te reo, it was a bewildering experience, but the alternative was correspondence lessons and I was determined to go to real school. By the time my sister came with me a couple of years later we were deemed old enough to walk down our hill, past the office and up the winding path to the village to catch the school bus with all the other children. ‘Maori Battalion’ was the favourite song of the bus.

Pinedale was a thriving community with lots of children and lots of social events. The village hall was the venue for dances and for Sunday school, which my sister and I attended every Sunday, oblivious of the arrangement that the various religions alternated, treasuring the decorated certificates for good attendance etc.

The movies were in Putaruru, so as far as we were concerned they might have been a million miles away. My mother did not drive, so groceries, meat and vegetables were ordered by telephone from Barr Browns, and we optimistically added ‘skipping rope’ to the end of the list each time but somehow it never arrived. Milk was dippered out into billies at the gate. Shoes etc. meant a trip to Rotorua – an annual event.

Special memories include the time we saw the aurora australis dancing across the night sky. Our father thought it was a bush fire and we drove home at breakneck speed. And then there were the real bush fires, when the men came in black and exhausted. We had had classes in a church hall for a year after the fire at Putaruru School in 1945. I remember the man who painted our house and who never left the property for the entire time (it turned out that he was a prison escapee on the run).

Another memory is racing into the new school for five minutes to say goodbye to my class in October 1948 when we left for Auckland. It was before the days of social promotion so some of my classmates were large boys of 13 or 14.

I never went back – it was on to Howick District High School and from there to St Cuthbert’s College for young ladies! And now Pinedale as it was is no more.

Great memories of Pinedale living there til 1963 and then visiting every so often even after the houses were all demolished in the 1980s. My kids & their cuzzies enjoyed playing on the huge sawdust hills, swimming in the Oraka & exploring through the quarry to Whakaaratamaiti. When I was in school on some weekends myself & cuzzies Joe Smith & Steve Nathan would walk up to Ngatira from town (Putaruru), picking blackberries & raspberries, on the way and would visit the sawdust hills and township. Lots of Aunty's houses in Pinedale & Ngaatira to call into for a cuppa, bread & jam. Lots of cuzzies, Hill's, Hohaia's, Martin's ...tennis court, sports paddock for rugby, league & Ki-o-Rahi...and I remember a wild deer nonchantly visiting the village when I was very young. Shop, hall, mill...

Hi I lived in pinedale from

Hi I lived in pinedale from 1973 til it closed in 84 or 85 I had an awsum childhood out thea. Going to the river with the other kids in the village. Playing on the sawdust, even tho we weren't allowed to. All the adults out thea were called Aunty & Uncle even though they weren't related. Good memories. I could go on & on about the place, I wish my sons could of had the same experience as I did. I still keep in touch with some of the families that were out thea.

I also keep in touch with

I also keep in touch with Uncle Hank and Aunty Ed.We were up in Orewa with them before Easter for two days.They have a lovely apartment at the Retirement village.I loved Aunty Dawn and was saddened when she died.Last year when we were in Orewa Hank took us to a country Pub(The Cow)where I caught up with another ex villager,his nephew Billy Randall(Pinedale my time)Had a great afternoon.It would be great to see some more people from The Village posting on this page.The Gibbs family moved to Whangamata as well,Far as I know Bruce is a builder there.

The people who were in the

The people who were in the cookhouse were Murray(HANK)and Dawn Parsons who didn't have children of their own so the two wee boys who sadly drowned were from the Village.Hank made a shield in memory of the boys which was presented to the Pinedale Fire Brigade which was used in the two man event.I saw him early this year and we always talk about the good old days.He is 86 years old but his memory is very sharp.

Hi I also lived at Pinedale

Hi I also lived at Pinedale around 1964 with my 2 brothers and sister. I have often thought about Pinedale and had heard it was now gone. I remember our house was second to last at the end of the road. Every so odten an inspector came and checked all the houses to make sure they were neat and clean! my mother would always have the best kept house, I remember having to go to our neighbours and help out, stuffing things under the couch cushions. My dad was an artist and after a day at work he would set up his easle at the window looking out over the village and paint the view. We kids used to go out into the bush and climb the sawdust mounds, swim in the river (I nearly drowned once) my mother always told us to be careful though in the bush, there were certain places we couldnt go because of quicksand, I remember the cook at the cookhouse had 2 kids who died in the quicksand, it's a memory that I think about every now and again. Does anyone remember Dummy the deaf mute who played with us kids, he was an odd person but he always had plenty of lollies for us, i can see him now lumbering up the hill track from the cookhouse with his box of goodies. I was too young to remember a lot, but I have a number of memories which I treasure. Pinedale wasnt the only mill village we lived in, we were also at Murapara and Waihaha so we were die hard mill kids. It's funny as I now live in New York such a long way from my roots.

Moved to Pinedale from

Moved to Pinedale from TePuke as soon as a house became available,about 1956ish.We lived up the North end about three years and then down to live next door to the shop.It was a fantastic time,OSH today would throw parents in jail for most of the things we kids got up to..like playing on the great heaps of sawdust,going down to the river for eels or koura,lighting fires to cook them.I still remember most of the kids names and a few years ago there was a reunion which I did'nt know about and would love to have gone to.I have a video and photographs of the night,sent to me by the only contact I have and had a job picking out the old faces.My friend and his wife took over the cookhouse and even though we had moved to Whangamata in 1963 I still went there for school holidays.He taught me to drive in his old vauxhall on the Pindale Road with the logging trucks to watch out for,some mean feat.I was 12!We went to Pinedale in 1987 and it was sad to see that it was all gone.We make sure to call in to the Museum for a nostalgic wander around.Great to see the Pinedale so well presented.We live down South so don't go up that often. Anyone reading this please tell your story.

I also lived in Pinedale

I also lived in Pinedale after being born in Arapuni Maternity Hospital on the 4th March 1942. I am Gerald Mullane son of Pat and Elsie Mullane. My older brother was Jim (1938) and my sister was Colleen (1940). We lived in the very last house in the village,which over-looked the mill site. There was a "turn-a-round" outside our place, because that was the end of the one and only street in the village. I remember my sister having both feet burnt when she went through the top layer of sawdust which was burning underneath.Would love to contact Jocelyn if possible.