How green was my island? 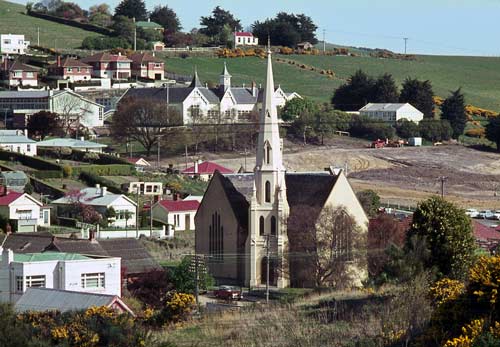 The working-class suburb of Green Island appears very rural in this view looking south, probably around 1960. The graceful Green Island Presbyterian church, the third one to be built by the congregation, was opened in May 1878. Originally it had two spires, but the central one was removed when the structure, never very sound, was seen to be under strain. The instability led to the church’s later demolition. The primary school, with clock tower, is visible behind the church. Ross Somerville’s family moved to Green Island in 1958.

We moved to Green Island in 1958, when I was seven. There were only four of us kids at that stage (the youngest was born while we lived there). Dad (Tom Somerville) was to be the minister at the gracious old Green Island Presbyterian Church.

We arrived from Auckland in the middle of winter and for the first few months stayed in Mrs Smellie’s house in Abbotsford while we waited for the new manse at 6 Church Street to be completed. I remember standing on the railway overbridge on the way to Green Island school, engulfed in a cloud of steam as the train rumbled underneath, and our first experience of frosts and frozen puddles.

The worst thing about school was that Dad would come and take prayers at assembly and I shuddered with embarrassment as the whole school chorused, ‘Good morning, Mister Sunnavool!’ And then there were Dad’s excruciating jokes. Since I was the minister’s son there was an assumption I was a goody-good and a certain amount of scrapping and scuffling was required to put paid to the stereotype.

A childhood trauma I recall was skinning my knee on the toxic footpath opposite the school in Howden Street (it smelt bad and had funny iridescent streaks rising to the unpaved surface). I ended up in bed for ages with hot poultices and a course of disgusting Lane’s Emulsion (creosote and fish oil in an unappetising suspension).

When we came to Green Island the cement works were still spewing out a dusty cloud which covered the entire suburb in a layer of grey. People despaired of ever getting their windows clean. With the tannery, the porridge factory (Harraways), NZ Industrial Gases and the abattoir just up the road at Burnside, Green Island was not the most salubrious of places and hardly lived up to its name! The Civic cinema added a dash of colour and style to the Main South Road, and the old church (now long demolished) backed onto the shunting line and next door was the dour Kirkland Hall whose floor had been built on a slope to prevent it being used for dances, apparently the devil’s work. It seemed wrong to me that that ghastly symbol of Victorian morality should have outlived its pretty Gothic neighbour.

My mother, Rosalie, remembers that in those days Green Island was a village, a life apart from the city over the hill. The grocer and the butcher still delivered orders to the house, and everyone knew everyone else. Many families were related to each other and there were lots of old people, remnants of long-established families. She still has good friends from that era though many of then no longer live in Green Island.