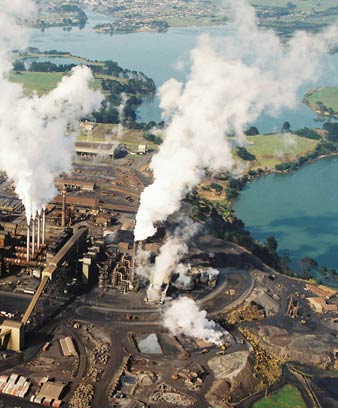 New Zealand’s aluminium, steel, and pulp and paper industries were all set up after the Second World War, when the government was eager to diversify the economy. These high-cost, resource-hungry operations employ thousands of New Zealanders and earn big money. All are in the North Island – except the aluminium smelter, which is at Bluff.

Large industries cost a lot to set up, use huge amounts of power, water and raw materials, and employ considerable numbers of people.

The paper, aluminium and steel industries were set up after the Second World War, with help from the government, which wanted to set up new industries. All except aluminium are in the upper North Island.

In the 19th century people needed paper for letters, newspapers and wrapping paper. The first two paper mills were set up in 1876, in the South Island. They used rags, rope, sacks, waste paper, tussock grass and flax to make paper. But there was not much waste material, and the grass and flax did not make good paper. The mills struggled to make a profit.

In the mid-20th century the paper industry boomed. There was plenty of raw material from maturing pine forests. The economy was expanding, and people needed more paper. Pulp and paper mills were set up in Auckland, Tokoroa, Whakatāne and Kawerau. The companies built towns at Kawerau and Tokoroa for their workers to live in.

The waste from pulp and paper mills pollutes the water and air. Mill effluent goes into rivers, and can harm plants and animals. Today mills are trying to reduce environmental damage.

Aluminium is the most common metal in the earth’s crust. It is light and strong, and conducts electricity and heat. Aluminium is used in mobile phones, computers and aeroplanes. New Zealand’s only aluminium smelter opened at Tīwai Point, near Bluff, in 1971. It produces the world’s purest aluminium, made from raw materials imported from Australia, the US, Mexico and Korea.

Steel has been used for building and engineering since the late 19th century. It is made by combining iron and carbon. New Zealand’s ironsands contain iron – but for many years there was no reliable method of extracting it. From the 1950s, a successful steel industry developed, with the privately owned Pacific Steel and the government-owned New Zealand Steel.

Print the full story
Next: Page 1. Paper: the first attempts Next