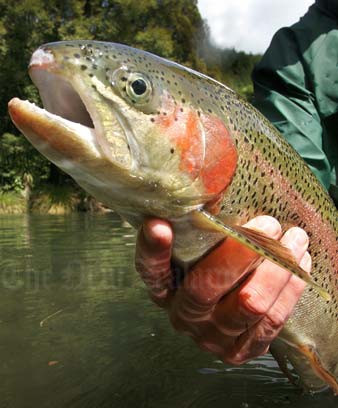 From the late 1800s, British settlers introduced fish of the Salmonidae family – trout and salmon – to New Zealand. Many species were released, yet only three established themselves well enough to form important fisheries: brown trout, rainbow trout and Chinook salmon.

European settlers brought trout and salmon to New Zealand’s lakes and rivers so they could fish them for sport. The most common species today are brown trout, rainbow trout and Chinook salmon.

Brown trout were brought in during the 1860s and quickly spread into the rivers and lakes. With plenty of native fish to eat, the trout grew fat – weighing up to 10 kilograms. Today, most brown trout caught by fishermen weigh 1–2 kilograms.

Rainbow trout were imported in the 1880s. They did not spread and breed as well as brown trout. Today, anglers often catch rainbow trout weighing 2–3 kilograms.

Chinook or quinnat salmon are native to North America and Asia, and were brought to New Zealand in the early 1900s. They are big, often weighing 10–15 kilograms.

Print the full story
Next: Page 1. Brown trout Next