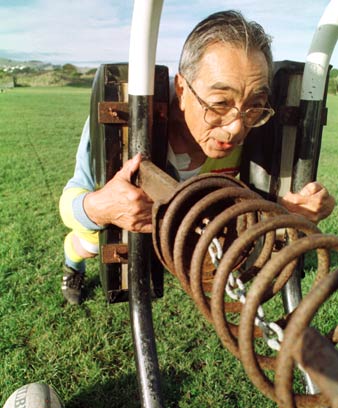 Japan and New Zealand: two island nations in the Pacific, both with dramatic scenery and prone to earthquakes. Yet in the 19th century they were worlds apart. For decades, Japanese visitors to New Zealand were a rarity, and the Second World War destroyed friendly contact. But new links were established after the war, and today, thousands of Japanese New Zealanders and visitors live, work or study here. And Kiwi culture has been enriched by Japanese influences, from pottery and garden design, to karaoke and martial arts.

Most early Japanese arrivals to New Zealand were visitors rather than settlers. A travelling troupe of circus entertainers was among the first to arrive, in 1874. In the 1800s, naval ships docked for a time, then went. The captain of one of these presented a samurai suit of armour to the Māori King Tāwhiao.

Until the First World War only 10 Japanese had been naturalised as New Zealanders. By 1920 there were still only 14 Japanese men living in New Zealand. Numbers rose from the 1920s, after businessmen – mostly wool traders – were allowed to stay. Goodwill visits continued and trade increased, especially in the 1930s.

But in 1941, when Japan bombed Pearl Harbor, the two countries were at war. Five Japanese residents were imprisoned on Somes Island in Wellington Harbour, and hundreds more were held at a prisoner of war camp in Featherston.

After the Second World War political, economic and cultural contacts were slowly resumed. Some Kiwi soldiers brought back Japanese brides, who often found it difficult at first to fit in to New Zealand culture.

From the 1960s, Japan became a major trading partner. The 1964 Tokyo Olympic Games and New Zealand’s Expo 70 in Osaka fostered friendship. Inspired by touring exhibits of pottery, martial arts and ikebana (flower arrangement), some New Zealanders began to take an interest in these aspects of Japanese culture.

Today, because Japan has become more affluent and westernised, and New Zealanders are more used to non-European people, those who come to work or study find it easier to adjust.

In 2013 almost half of New Zealand’s Japanese were living in Auckland, with large groups also in Christchurch, Wellington and Dunedin. In these cities there were signs of Japanese culture – food markets, karaoke and sushi bars were all popular.

Print the full story
Next: Page 1. East and West: early days Next