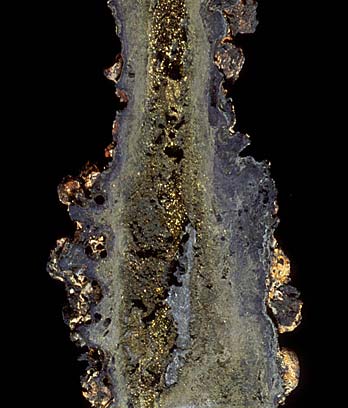 The sea floor around New Zealand contains vast quantities of valuable minerals, from sand to gold. There is much interest in extracting this deep-sea treasure, potentially worth up to $500 billion. For now, however, it remains largely untapped.

Minerals in a black smoker chimney

New Zealand is just the tip of a mini-continent that lies under the ocean. The seabed surrounding the country is managed by New Zealand, and is known as the Exclusive Economic Zone. Some parts of the sea floor contain gravel, sand, and minerals such as cobalt, manganese, phosphate and nickel. These resources could be worth billions of dollars. For example, phosphate is used as a fertiliser, and gravel and sand are used in the construction industry.

How do marine minerals form?

Minerals in sea water can crystallise directly onto the sea floor, sometimes at depths of 5,000 metres. There they form potato-sized bumps, or nodules. Thick crusts containing manganese and cobalt also form on the sides of underwater mountains. These processes are incredibly slow. It can take a million years for a layer as thick as your thumb to form on a nodule.

On underwater volcanoes, hot springs (vents) spurt fluid containing valuable minerals such as gold and silver. Sometimes this looks like black smoke coming from a chimney. When the hot fluid mixes with cold sea water, the minerals in the fluid crystallise and sink to form a crust on the volcano.

Where are New Zealand’s marine minerals?

Important mineral-rich underwater regions in the Exclusive Economic Zone include:

Iron and other heavy minerals are also found in sand lying on the seabed. Waves wash these sands onto the beaches. Ironsands are mined on the beaches of the Waikato coast. North of Auckland, sands are dredged from the ocean floor, to make concrete.

New Zealand’s deep-sea minerals are not yet being mined. It is expensive and difficult, and often the minerals are not highly concentrated. More exploration is required to see whether certain mineral deposits are large and concentrated enough to overcome the expense of extraction.

Print the full story
Next: Page 1. Nodules, crusts and vents Next