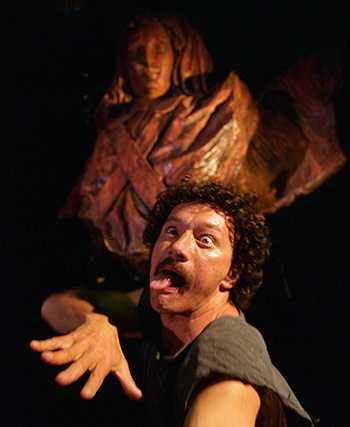 Māori theatre flowered in the later 20th century, driven by the Māori cultural renaissance, and the whare tapere – a traditional site for entertainment and performance – was revived.

In traditional Māori society, the whare tapere was a site for storytelling, dance, music and games. Whare tapere fell into disuse in the late 19th century, but in the 2000s the Ōrotokare Trust was working to revive them.

Some early Pākehā stage productions included Māori forms such as the haka. Māori actors appeared in early films such as Hinemoa (1914), but Māori were not consulted over the content. Māori formed concert parties to perform songs and haka, and in 1941 the Maori Musical Society performed Hinemoa in Rotorua. In 1957 Bruce Mason’s play The pohutukawa tree featured Hira Tauwhare in the lead role, which she later also performed for British television.

A 1965 production of American opera Porgy and Bess featured Īnia Te Wīata in the lead and 30 other Māori in the chorus, including Don Selwyn and George Henare. It led to the formation of the Maori Theatre Trust, which performed in New Zealand and overseas.

From the 1970s Māori activism led to a wave of activity in Māori theatre.

Marae theatre, where the theatre is treated as a marae, also began in the 1990s. In 1995 Taki Rua began its annual season of plays in te reo Māori (the Māori language). In 1997 Taki Rua ceased to have its own premises and focused on touring.

In the 2000s Māori theatre explored a wider range of topics and genres. Taika Waititi and Jemaine Clement turned the legends of the demigod Māui into comedy, while playwrights Albert Belz and Whiti Hereaka dealt with a range of issues. A Māori translation of Shakespeare’s Troilus and Cressida was performed at London’s Globe Theatre in 2012.

Print the full story
Next: Page 1. Origins of Māori theatre Next