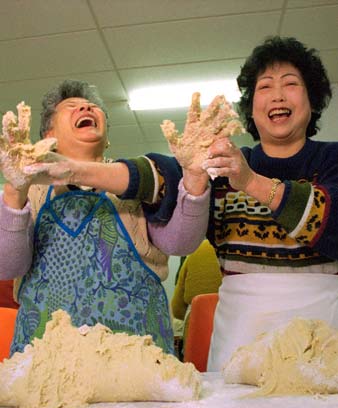 The young Chinese men who sailed from Guangdong province to the goldfields of Otago in the 1860s found themselves in a strange new world. Few struck gold, and they faced prejudice and hardship. With more liberal immigration rules from 1987, new waves of Chinese have brought diverse skills and languages, and revived traditions such as the lion dance and the lantern festival.

In the 19th century people in south China faced famine and overpopulation, and many men sought to make their fortunes overseas. It soon became difficult for them to enter New Zealand because of restrictions on Chinese immigration.

The first known settler was Appo Hocton, who jumped ship at Nelson in 1842. Starting out as a servant, he eventually became a businessman and farmer, prospering through hard work.

Twelve Chinese were brought to work the Otago goldfields in 1866. By 1869 over 2,000 had come to the ‘New Gold Mountain’, as they called New Zealand. But rather than striking it rich, most experienced poverty, racism and isolation.

Ignorance and prejudice meant that Chinese were seen as undesirable – a number of harsh laws limited their rights in New Zealand. To restrict immigration, in 1881 the government charged them a poll tax (entry fee) of £10, later raised to £100. This taxation continued until 1934. In 2002, the government apologised for the hardship it had caused.

Life in the towns

After leaving the goldfields some men found work in fruit shops and laundries, or as market gardeners. Few women could join them because of the poll tax. The men often sought comfort in opium and gambling, which only increased anti-Chinese prejudice.

Attitudes softened when China fought Japan before and during the Second World War. As more women and children were allowed to come, families formed communities. But by the 1960s, they were losing their language and traditions.

A new policy in 1987 allowed many more Chinese to immigrate from China and elsewhere.

After Europeans and Polynesians, Chinese form New Zealand’s largest ethnic community. Generally they are well educated, and come for work or the lifestyle. Recent immigrants have revived Chinese culture and languages.

Print the full story
Next: Page 1. Recent developments Next