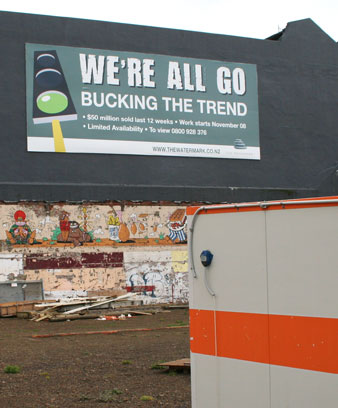 New Zealand’s business cycles are strongly influenced by international factors. The Korean War wool boom triggered a phase of expansion, while the oil shocks of the 1970s and the US sub-prime mortgage crisis began periods of contraction.

Story by Viv B. Hall

What is a business cycle?

The economic activity of businesses changes over time, expanding or contracting. A business cycle is when many different businesses all expand or contract at about the same time.

A classical business cycle refers to rises and falls in total production.

The growth cycle refers to changes in the growth rate of production.

The importance of business cycles

When business owners decide whether to hire or lay off staff, or buy new machinery, they need to consider whether businesses in their area, and businesses generally, are expanding or contracting.

Business-cycle fluctuations that are very long or big can lead to too much inflation (in the expansion phase), or not enough growth and too much unemployment (in the contraction phase).

Since the Second World War there have been nine classical cycles of expansion and contraction in New Zealand. Most of the periods of expansion lasted more than five years, while the contractions lasted about a year.

New Zealand’s business cycles have not followed a predictable pattern. Turning points in cycles have mostly been due to international factors, including:

Print the full story
Next: Page 1. What is a business cycle? Next