Story: Kōhatu – Māori use of stone 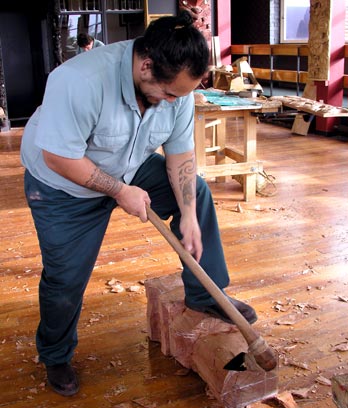 Māori used a variety of stone materials such as basalt, greywacke, pounamu (New Zealand jade), chert, and obsidian to make tools, ornaments and weapons, and in fishing and gardening. Stone was a valuable resource and some materials, like obsidian, were traded throughout the country.

Whakapapa of rocks and stones

Stone adzes and chisels were used for cutting and carving wood. The stone adze heads, made from basalt or other rock types, were lashed to a wooden handle.

Adzes were made by breaking up boulders, shaping the pieces with hammer stones, and sharpening the cutting edge on a grinding stone. Sandstone was widely used as a sharpening stone.

Flake tools were used for general cutting and scraping. They were usually made from obsidian (volcanic glass) and chert. Chert (or flint) was also used to drill holes, in making items such as fish hooks.

Short hand-clubs made from greywacke, volcanic rock and pounamu were used as weapons.

Stone lures with bone or shell points were used to troll for fish. Māori formed a groove around pebbles and wound a line around them to make sinkers, and pumice was attached to fishing nets as floats. Large stones were sometimes used as canoe anchors.

In some places stones were used to mark the boundary of gardens. Sand and gravel were also mixed with soil to make it loose, keep in moisture, and to keep the soil warm for growing subtropical plants such as kūmara.

Using stones, flax was pounded into fibre and made into clothing, mats, ropes, baskets and nets.

Round stones were heated for cooking in earth ovens, and to boil water. These were chosen carefully because some rocks explode when hot.

Print the full story
Next: Page 1. Stone tools Next