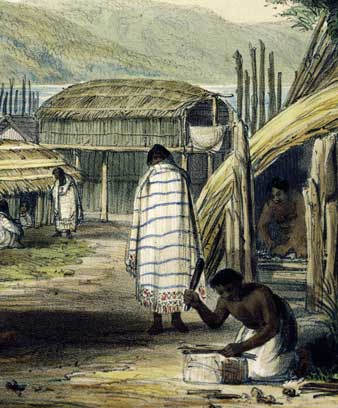 During the 1820s and 1830s, members of Te Āti Awa and other tribes left their ancestral home in Taranaki and travelled south in four great migrations, finally reaching the Kāpiti Coast and Wellington Harbour. After the arrival of the first English settlers in the area, many important sites were lost in the pressure for land.

The Te Āti Awa people who settled in the area of Te Whanganui-a-Tara (Wellington Harbour) are closely connected to two other tribes: Te Āti Awa of Taranaki and Ngāti Awa of the Bay of Plenty and the far north. All three are descended from Awanuiarangi, whose mother was Rongoueroa. Tradition says that Awanuiarangi’s father was a spirit, Tamarau.

Rongoueroa was also the mother of Whātonga, whose father was Ruarangi. Ruarangi’s father was the Polynesian explorer Toi. Whātonga’s son Tara is remembered in the place name Te Whanganui-a-Tara (the great harbour of Tara).

Between the 1820s and 1835, people of the Te Āti Awa tribe migrated to the Wellington region from Taranaki. They were forced to move south because of raids by northern tribes, particularly the Waikato people. The Ngāti Toa people were also pushed out of Kāwhia by the Waikato tribes.

Other tribes in Wellington

The impact of Europeans

In 1839 land in the Wellington area was bought by Europeans, a town was planned, and settlers began to arrive in 1840. As a result, Māori were forced to move outside the town. Many returned to Taranaki, but after the First World War they started moving back to Wellington to find work.

In 1977 the Wellington Tenths Trust was established. It represents the descendants of Te Āti Awa and other Taranaki people who lived in the Wellington area before European settlement. The trust administers the lands given to Māori in the purchase of Wellington.

In the 2013 census, more than 2,500 people said they were descended from Te Āti Awa of Wellington.

Print the full story
Next: Page 1. Identity Next