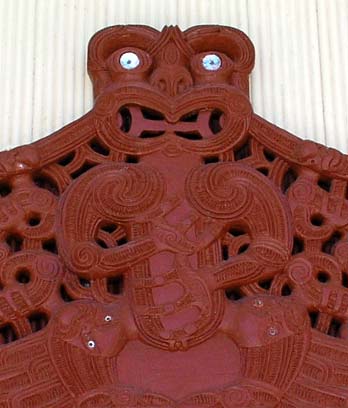 Resources from sea and land

Before the arrival of Europeans, the people of Ngāti Rongomaiwahine were able to live from the fruits of the sea and land. Food sources around the peninsula included abundant shellfish, seaweed, eels and whitebait. In the 1830s and 1840s there were whaling stations at Māhia Peninsula. After the stations closed, the people of Ngāti Rongomaiwahine continued to hunt for whales. Inland, the bush provided food and timber resources. Now sheep and cattle are grazed on farmed land. Te Whānau o Rongomaiwahine Trust has been established to ensure the resources of the peninsula are used for the benefit of its people.

Some features of Māhia Peninsula are of great ancestral significance. One of the area's most sacred sites is a whale-shaped hill called Te Ara-a-Paikea.

On the western side of the peninsula, the wind rushing through a hole in the summit of another hill, Taupiri, mimics the sound of whale song. Other areas are rich in local history and legend. The pool known as Te Wai Whakaata-a-Tūtāmure is where Tūtāmure looked at his reflection and decided that his younger brother was more handsome, and the more fitting husband for Rongomaiwahine’s daughter, Tauheikurī.

In the 2013 census, more than 4,000 people said they were affiliated with Ngāti Rongomaiwahine.

Print the full story
Next: Page 1. Important ancestors Next