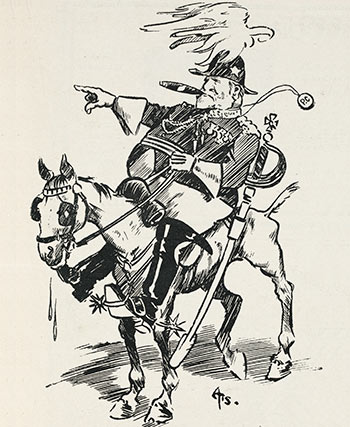 With his distinctive looks, abrasive personality and polarising politics, Prime Minister Rob Muldoon was a gift to political cartoonists in the 1970s and 1980s. New Zealand cartoonists also found rich material during the lively reign of Premier ‘King Dick’ Seddon and that of the first Labour government.

Malcolm Walker on Muldoon and the US navy, 1976

Political cartoons can quickly capture the essence of issues and personalities and express public opinion. The first New Zealand cartoons were published in the 1860s. At first most were imitations of British cartoons – there were at least eight local versions of British magazine Punch. After photo-engraving was introduced in the 1880s, newspapers began publishing cartoons. In the 1890s weekly newspapers began using cartoons widely.

Daily papers featured more cartoons from the mid-1920s, with cartoonists including Trevor Lloyd, A. S. Paterson and J. C. Hill. Gordon Minhinnick (‘Min’) was New Zealand’s leading cartoonist for decades. He worked for the New Zealand Herald from 1930, and produced work attacking the policies of the first Labour government.

The 1950s and 1960s were a quiet period for cartooning. The 1970s and 1980s were a period of public protest, political conflict and social changes, and inspired strong work from cartoonists. Many of the new cartoonists in this era – including Tom Scott, Murray Webb and Bob Brockie – were still working in the 2000s. Cartooning has been largely a male-dominated field. Women cartoonists include Rosemary McLeod, Sharon Alston and Sharon Murdoch.

In the 2000s cartoons were seen as important historical sources. They were collected in the New Zealand Cartoon Archive in Wellington, which by 2013 held over 50,000 cartoons.