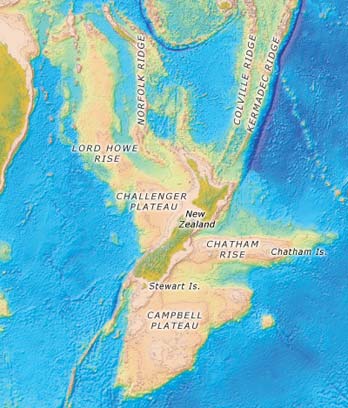 Like the land, New Zealand’s sea floor is dramatic and dynamic. It is studded with active volcanoes, gouged with channels and smothered by huge landslides. It is constantly moving: the seabed is being sheared and destroyed in trenches up to 10 kilometres deep.

New Zealand is actually part of a continent known as Zealandia. Over 90% of it lies under the sea.

The continental shelf is the shallow underwater part of a continent. The shelf around New Zealand is rich in fish and minerals. In the last ice age, 20,000 years ago, more of the land was above water, but when the ice melted the sea level rose.

Continents are surrounded by deep ocean basins, where molten rocks are squeezed out from inside the earth. This is where the sea floor is being formed. As new rock gets pushed out, the sea floor moves like a very slow conveyor belt. At the edge of the basins the rocks are very old. Some of these rocks are heavy, and sink back into the sea floor; others get scraped up onto the shelf and become part of the continent.

An abyss is the name given to a very deep basin – about 4–5 kilometres under the ocean surface.

On the sea floor there are active (moving) plates of the earth’s crust. These may collide, or slide past one another, creating deep trenches like the Kermadec Trench north-east of the North Island, and volcanic ridges. A line of volcanoes lies to one side of the Kermadec Trench, marking a place where the seabed is being torn apart.

The sea floor is covered with layers of sediment: sand or mud. The sediment on the sea floor around New Zealand is varied. Rivers carry mud out to sea, where it is deposited on the sea floor. In the far north and south, where there are few large rivers, the seabed is covered in a residue of tiny shells (microfossils).

Print the full story
Next: Page 1. Zealandia: the New Zealand continent Next