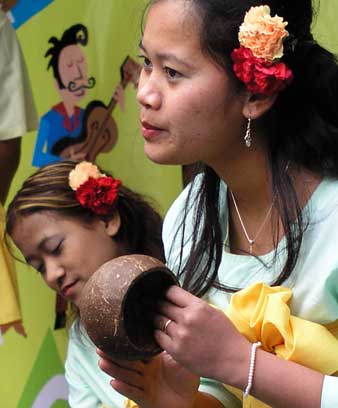 Most Cambodians came as refugees fleeing the atrocities of the Khmer Rouge. Rebuilding their lives was a difficult process – there were setbacks as they plunged into the language and culture of a new country, as well as opportunities. Although one of the smaller ethnic communities in New Zealand, Cambodians are becoming increasingly visible. Groups of all ages sing and dance in cultural festivals, and foster their language, Khmer, and their religion, Theravada Buddhism.

In 1975, the Communist Khmer Rouge, led by Pol Pot, threw Cambodia into turmoil by abolishing money, schools and the right to own private property. They ordered people out of the towns and cities, forcing millions to work on the land. Almost 2 million died of starvation, exhaustion and malnutrition, while others were tortured or killed. Hundreds of thousands fled to refuge in other countries.

Fitting in: work, community and culture

As numbers have increased, Cambodian culture has become more visible. But life has not been easy for the immigrants. Many did not speak English well, and had no experience of the kinds of work that were available in New Zealand. Most toiled in manual and processing jobs, including those who had professional qualifications.

Community associations now flourish in the country’s main centres. Such groups play a large part in keeping the community together by participating in festivals and providing places to celebrate religion and culture.

The Theravada Buddhist religion is still followed by most Cambodians in New Zealand. Children can learn the language of their homeland by joining Khmer language classes.

Print the full story
Next: Page 1. Immigration: refugees and resettlement Next