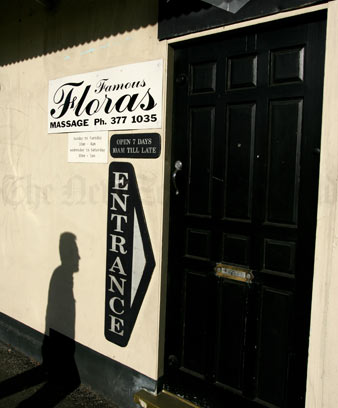 While prostitution as such has never been illegal in New Zealand, soliciting in a public place, brothel-keeping and living on the earnings of prostitution were all against the law, and sex work was strongly stigmatised. In 1987 sex workers established the New Zealand Prostitutes’ Collective to lobby for their rights, and in 2003 New Zealand became the first country in the world to completely decriminalise sex work.

Prostitutes on the Lancaster Witch

Sex workers or prostitutes provide sexual services in exchange for money or goods.

From the late 18th century some Pākehā sailors, whalers and traders exchanged muskets and other goods for sex with Māori women.

Brothels flourished in colonial settlements, often hidden behind bars, hotels and shop-fronts. During the 1860s gold rushes some women worked as prostitutes on the goldfields.

Many people saw sex work as a social evil. Under the Contagious Diseases Act 1869, women suspected of prostitution could be forcibly examined for venereal disease, then locked up and treated. Women’s groups criticised the act because it punished sex workers rather than their clients. The Police Offences Act 1884 made it illegal to offer sex for money in a public place.

Types of sex work in the 20th century included:

In 1987 a small group of sex workers set up the New Zealand Prostitutes’ Collective (NZPC) to improve the situation of prostitutes and work for their rights. There was concern about HIV/AIDS, and the government funded NZPC to promote safe sex in the sex industry. In the 21st century NZPC had offices around New Zealand.

Being a sex worker was not illegal, but it was illegal to keep a brothel, live on the earnings of prostitution, or offer sex for money in a public place (soliciting) – including in a massage parlour. Undercover police sometimes posed as clients in parlours and arrested workers if they offered sex for money. There was a double standard – clients who paid for sex were not committing an offence, but workers who offered sex for money broke the law.

From the 1990s there was a campaign to reform prostitution law, and in 2003 sex work was decriminalised in New Zealand.

Most sex workers are women, but some are men, who provide sex mostly for other men. Many transgender people have worked in the sex industry, usually because they could not find work elsewhere.

Very few people in New Zealand are forced to work in the sex industry. However, the pay is better than that for many other jobs that women typically do. There is still a stigma attached to sex work, and many workers keep it secret.

Clients are almost all men, of all ages and occupations.

Print the full story
Next: Page 1. 19th-century sex work Next