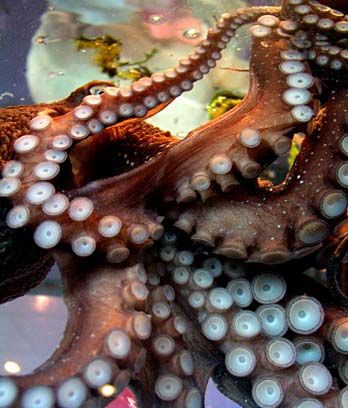 Octopus and squid are fascinating creatures. The internal, spiral shells of tiny ram’s horn squid are a common sight on west coast beaches, and a colossal squid, thought to grow to 15 metres, was brought up from the deep waters in the south.

Octopus and squid belong to a group known as cephalopods. Cephalopod means ‘head-footed’ – the arms and tentacles are attached to the head. Their closest relatives include snails, slugs and shellfish.

Most octopus species lay their eggs on the sea floor. Some carry the eggs around in their mouth.

Most types of squid release free-floating, jelly-like clumps of eggs – those of arrow squid can be 2 metres in diameter. Females of one species hold their eggs in their arms. Most squid and octopus hatch as tiny adults.

It is thought that they live for only one year, and die after mating.

There are 42 species of octopus in the waters around New Zealand. They are not often seen, as most live on the sea floor. The region is home to two of the world’s largest types of octopus. The giant gelatinous octopus grows to 4 metres, and the giant South Pacific octopus reaches 3 metres.

New Zealand has more than 85 species of squid, most of them in the open sea.

Adult giant squid breed in deep waters around New Zealand. Females reach 13 metres in length. They have eyes the size of dinner plates to see flashes of light from passing fish, which they eat.

Print the full story
Next: Page 1. Head-footed animals Next