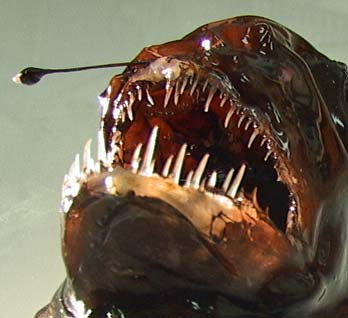 Mythical depictions of life under the ocean featured strange and sometimes grotesque beasts – extravagantly spotted or striped, some with fearsome fangs, some foreshortened, others of monstrous size. Today we know that these visions were not so fanciful: there are such creatures and more in the abyss, which still largely remains a mystery.

Zones of the ocean

For thousands of years people imagined giant sea snakes and other beasts might live deep in the ocean. Then in 1872 the sailing ship Challenger voyaged around the world to investigate the deep sea, and discovered nearly 5,000 species. In the 1970s trawlers explored down to 1,000 metres around New Zealand, and scientists learned more about the life forms there. There are indeed giant eels and other creatures quite similar to those of ancient legend.

The ocean has different zones that have been named by scientists. The epipelagic zone is nearest to the surface. This is the ‘food factory’, where sunlight penetrates and is used to produce food.

The deep-sea zones below this have similar life forms around the world. Fish have been found down to 8,400 metres.

There is not much light in this twilight world. Lanternfish, shrimps, squid and other species produce their own light, called bioluminescence, to find prey. Often they have big eyes to gather light. Some shrimps and squid squirt a cloud of luminescent ink in their own shape, to fool predators.

Bits of food from the epipelagic zone float down, and some fish migrate upwards at night to feed. Their gas-filled swim bladders help them move upwards and downwards. Others are motionless: they must save energy as there is not much food. It is colder here, with less oxygen.

There is no light here, and food is scarce. The swallower eel has a gigantic mouth to capture large prey for a long-lasting feed. Another eel has a venomous fang for killing shrimps. Life forms are mostly black, red or transparent, and use bioluminescence to find a mate.

Abyssopelagic zone: from 4,000 metres down to the ocean floor

Creatures here are mostly tiny bacteria living under the sea floor. Amazingly, these make up one-third of all life on earth. There are also starfish, sea urchins and sea cucumbers. Fish include orange roughy and the strange tripod fish, which stands on its three fins. In the dark waters of Fiordland, scuba divers can see some of these species at shallower depths.

The very deepest region is called the hadopelagic zone – at the bottom of ocean canyons, some at 11,000 metres.

New Zealand exports thousands of tonnes of deep-sea fish such as hoki, ling and orange roughy, caught by trawling and longlines. There are rules to stop people overfishing some species.

Print the full story
Next: Page 1. Exploration of the deep Next