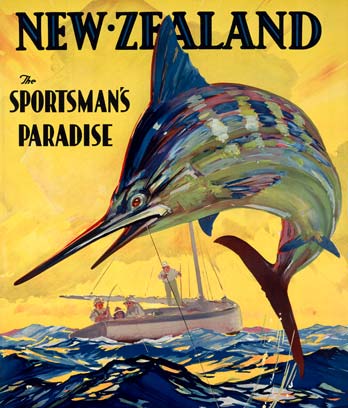 Dangling a line from the wharf on a tranquil evening has many rewards, quite apart from catching a fish. At the other extreme is the adrenalin-fuelled challenge of a threshing, 3-metre marlin in the open ocean. Living within easy reach of the coast, many New Zealanders love to try for a meal of fresh fish.

At weekends or in the summer holidays, thousands of children and adults take lines, fishing rods or nets to the beach. They look for where fish gather – near reefs, or where sea currents meet.

What fish do people catch, and where?

There are many ways to catch a fish, including:

Big fish such as tuna are caught in northern New Zealand, where they feed on smaller fish. The sport became popular after the visit of a famous American writer, Zane Grey, in the 1920s. He wrote of his adventures chasing marlin and sharks, and introduced better fishing gear.

Most people catch big game using a rod and reel. Some try to attract big fish by pulling a lure that moves like a little fish. Others use bait to catch marlin and swordfish. When a fish is hooked, it may fight for hours.

There are rules to stop commercial fishing boats taking too many game fish. Big-game fishermen are careful with the fish they catch, returning many to the ocean. There are limits on how many kahawai and snapper people can take.

Print the full story
Next: Page 1. A rewarding pastime Next