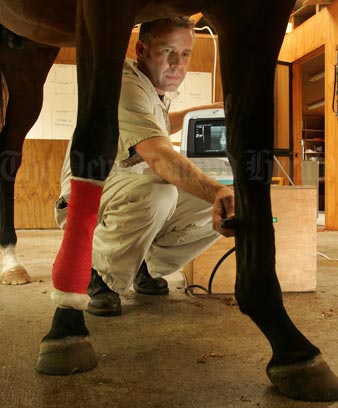 Cats and dogs make up the largest share of veterinarians’ work in New Zealand – but vets are also vital to the farming sector. Urban vets run specialist clinics and may offer pet grooming and boarding. In the countryside, tougher working conditions and long travel distances have led to a shortage of rural vets.

In the early days of European settlement in New Zealand, there were very few veterinarians (vets). One of the first was J. W. Woodhouse, who opened a hospital for sick horses and cattle in the Hutt Valley in 1856.

Government vets chose horses to be sent overseas with troops in the First World War and other wars. They set up veterinary hospitals in North Africa to treat these animals.

In the 1940s there were not enough vets – partly because there was no training course in New Zealand. Vets were brought in from overseas, but the shortage continued.

Many New Zealand vets trained in Australia, until a course was set up at Massey University in Palmerston North, in 1962.

Vets have always played an important role in farming. From the 1960s they set up programmes to control disease, and dealt with problems like parasites becoming resistant to drenches. New technology includes ultrasound scanning to check if an animal is pregnant, and modern drugs and vaccines.

At first, most vets were men, often helped by their wives. New Zealand’s first woman vet was Pearl Dawson, in the 1920s. In 2008, nearly half of vets were women.

Rural vets work mostly on farms. They travel long distances, see just a few clients each day, and take care of large, valuable animals like horses, sheep and cattle. They may be called out at any time of the day or night.

City vets often work with other vets at a clinic, where people bring their sick pets. The vet may see 20 clients a day – mostly cats and dogs, but also rabbits, birds, fish, mice and other animals. Some offer other services, like pet grooming or boarding, and sell pet foods and medicines.

In the 2000s, there were not enough rural vets. Many vets preferred to work in the city, where there were shorter hours and less travel.