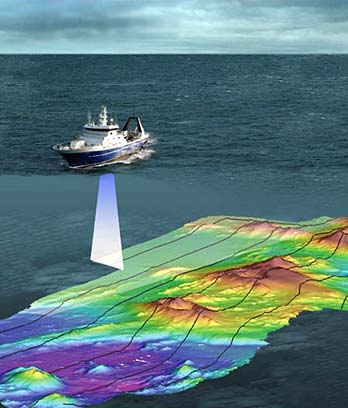 Where the land meets the sea, it doesn’t end there. In the deep, dark world beneath the oceans, there are mountains, valleys, plateaus and volcanoes. The early explorers first charted this dramatic and inaccessible terrain by lowering ropes, weighted with lead, to measure water depth. Today’s map-makers use more complex technology – multiple sound beams sweep across the seabed to give a precise record of its depth, shape, sediment character and much more.

What are marine charts?

Marine charts are maps of the sea floor. They show how deep the water is, and they also depict underwater mountains and valleys, and show whether the seabed is sandy or rocky. They may show buoys, lighthouses, and exposed or hidden rocks.

What are marine charts used for?

The charts are used for navigation. They provide vital information to anyone who steers a vessel, whether it is a small fishing boat or a huge container ship.

The Dutch explorer Abel Janszoon Tasman was the first to put New Zealand on the map, in 1642–43. He drew a ragged coastline, but did not chart the whole country. The first to do this was Lieutenant James Cook, whose map of 1769–70 was surprisingly accurate. In places he was able to find out water depth, the location of rocks and the outline of sandbanks. Some of his measurements were still on charts in the 20th century.

In the mid-1800s, when settlers arrived in New Zealand and began to trade, detailed charts were made of the waters around the coast. The first chart of the ocean further out was not published until 1895.

The earliest measurements of water depth and seabed shape were made using a lead weight on long rope, which was dropped over the side of a ship. Today’s surveyors use multibeam echo sounders – computers aboard ships which send beams of sound to scan the seabed. These instruments can collect a huge range of information, which is used to make detailed and accurate charts.

Print the full story
Next: Page 1. Making and using charts Next