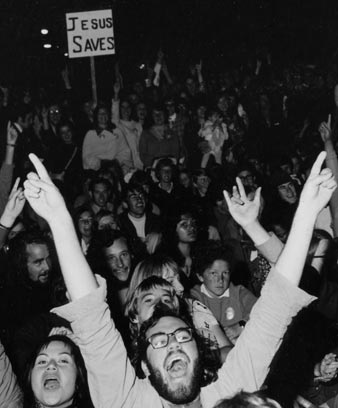 The story of Christianity in New Zealand is not only that of denominations. Many people rarely attended church but thought of themselves as Christians. Christians and churches often cooperated – through necessity, or with a common purpose.

In 19th century New Zealand, several Christian churches, or denominations, often built a church to share between them, as in many places their individual congregations were small. The different denominations, such as Anglican, Presbyterian and Methodist, took turns to run the church service.

There were several organisations, including the British and Foreign Bible Society, which raised money to distribute bibles and religious literature.

Interdenominational missions worked with Māori and provided help to the poor in cities and rural areas.

New Zealand state schools are secular, but since 1897 religious education programmes have been taught in some primary schools. Interdenominational organisations are active in schools and universities, and have become more diverse in recent years.

Ecumenism is the movement to bring churches closer together. It was supported by leading Christians and saw interdenominational chaplains appointed to prisons, hospitals and universities. In 1941 the National Council of Churches (NCC) was founded by seven Protestant denominations. In 1989 it was replaced by the Council of Churches in Aotearoa New Zealand, which included the Catholic Church. However, this closed in 2005 and attempts at organisational ecumenism have struggled since.

Evangelicalism is the movement to attract new followers through a personal, ‘born again’, experience of religion. Evangelists from overseas have visited New Zealand, including Billy Graham, from the US, who had large crowds at his meetings in 1959. Evangelical missionary work included Missions to Seamen and Open Air Campaigners.

The charismatic movement, which began in the 1960s, emphasised gifts of the Holy Spirit, such as prophecy and healing. By the 21st century some of the largest churches in New Zealand were charismatic. These ‘mega churches’ had congregations of up to 5,000.

Print the full story
Next: Page 1. Protestant collaboration Next