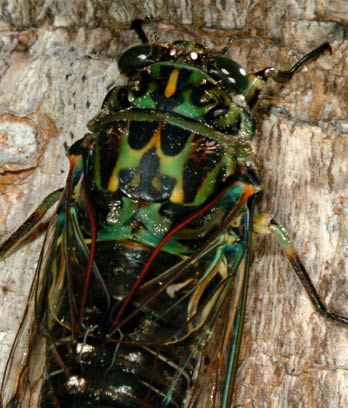 The hot days and balmy nights of summer wouldn’t be the same without the chirruping of cicadas. It’s the males that make all that noise – they are often visible on lamp posts and tree trunks. But they have actually spent most of their lives in the dark, deep underground.

Cicadas have a wide head, big eyes, four wings and six small legs. Unlike other singing insects, such as grasshoppers and crickets, cicadas do not have large hind legs for jumping.)

New Zealand has 42 unique species and subspecies of cicada. The biggest is the chorus cicada, with a wingspan as wide as your palm. In summer, the males sing in chorus for a mate.

Different species live all around New Zealand, from forests and grassland, to swamps, sand dunes and riverbeds. The chorus cicada also lives in cities, perching on fence posts and buildings. The small, black Maoricicada species are the only cicadas known to live high up in the mountains.

Cicadas spend most of their life underground, and emerge to become adults. You might see their empty skins on tree trunks.

Only male cicadas sing, to court females. The sound is made by membranes known as tymbals on each side of their abdomen. The tymbal is pushed out, causing a burst of sound. Then it pops back in. By rapidly repeating this, the cicada makes its song. Some New Zealand cicadas also make clapping sounds by flicking their wings against the branch on which they are sitting.

Both males and females have hearing membranes called tympana. Through these they hear the sound of the males.

Predators and other threats include wasps, beetles, fungal parasites, birds and spiders.

Print the full story
Next: Page 1. Introducing cicadas Next