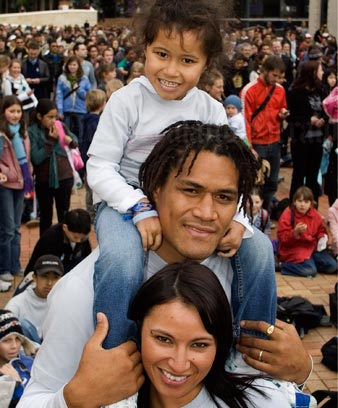 There are many different kinds of parents – traditional mums and dads, sole parents, same-sex parents, step-parents and adoptive parents. Rather than maintaining strict discipline, as was the norm in the past, parents are now expected to give their children freedom to grow and develop.

Diversity of parents and families

Parents can be biological (including by sperm or egg donation) or social – through adoption, fostering, step-parenting or whāngai.

The many different kind of families include sole-parent, blended (with step-parents and step-children) and same-sex-parent families. The most frequent family form in New Zealand in 2013 was a couple with children (41.3%), followed by couples without children (40.9%) and a parent with a child or children (17.8%).

The diverse cultural traditions of New Zealand also lead to diversity in families. Traditionally Māori children were seen as the responsibility of their whole whānau or extended family and grandparents were frequently involved in their care. Children lived in whānau settlements of 20-30 people – parents, uncles, aunts, cousins and grandparents.

Māori, Pasifika and Asian parents are more likely to bring up their children in extended family households. In 2013 17% of Pacific households with families comprised two or more families, compared to 11% of Asian households, 9% of Māori households and 3% of Pākehā households.

Roles of mothers and fathers

While Māori mothers were involved in many activities other than childcare and fathers were involved in bringing up children, the roles of mothers and fathers became more sharply defined after European settlement in the mid-19th century. Mothers and fathers were expected to play different roles for their children. Mothers stayed home and looked after children, while fathers provided for the family by going to work. It gradually became more common for mothers to be in paid work and for men to have a hands-on role with their children.

Unmarried parenthood used to be socially unacceptable, and many unmarried mothers had to give up their children for adoption. This attitude changed, and in 2017 nearly half of all mothers (46.9%) were not married when their first baby was born. Many of these mothers were raising their children with long-term partners.

When parents split up it was often thought best for children to live with their mothers. By the 21st century shared care was encouraged. In 2013 almost 18% of all families were one-parent families, most headed by mothers.

Parents use a variety of ways to manage and discipline their children. Some parents are very strict, while others are not. There has been a move away from physical discipline methods such as smacking, and parents are encouraged to use strategies like time out and rewarding good behaviour.

Organisations that give advice on pregnancy, birth, babycare and parenting include Plunket, Parents Centres New Zealand, Playcentre, La Leche League and the Parent Helpline. Parents also get advice from family and friends, and government agencies such as the Ministry for Social Development and Oranga Tamariki – Ministry for Children. Increasingly parents use internet sites such as Raising Children, Parenting Place – Mā tāua, oti atu ai, Kiwi Families, Great Fathers, and Skip (Strategies with Kids –Information for Parents). While some parents continue to buy books about parenting, many read and contribute to blogs written by other parents.

Print the full story
Next: Page 1. Different kinds of parents Next