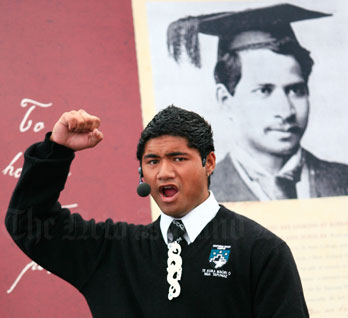 The word ‘māori’ originally meant ordinary or local. It was only used to mean Māori as a people after Europeans arrived in New Zealand. Māori also called themselves ‘tangata whenua’ (people of the land, or those who were there first).

Early Pākehā arrivals used the words Indians, aborigines, natives and New Zealanders to describe Māori. Until the mid-20th century the term ‘native’ was used officially, although many Māori objected to it.

From the 1950s many Māori moved from rural areas to cities. They experienced prejudice from Pākehā, who sometimes saw them as lazy, and used negative terms such as Hori, boonga and nigger.

Māori gangs such as the Mongrel Mob and Black Power arose in the 1960s and 1970s, and from the 1980s young Māori adopted the Caribbean religion of Rastafarianism. More recent street gangs inspired by US gangs called themselves ‘gangstas’.

Living in urban areas brought Māori from different tribes together. They referred to themselves as ‘cuzzies’ (cousins) and ‘bros’ (brothers).

The word ‘kūpapa’ originally meant Māori who fought alongside government troops in the 19th-century New Zealand wars. It has been revived to mean Māori who act against the interests of Māori in general.

New terms for Māori in the early 21st century included:

Print the full story
Next: Page 1. Early Māori identities Next