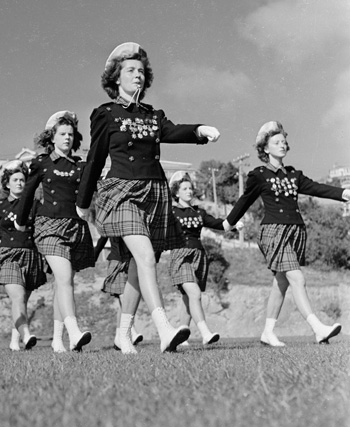 The sport of marching is a uniquely New Zealand one. It became a competitive sport for women and girls in the 1920s and quickly grew in popularity. However, participation has diminished since its heyday in the 1970s and 1980s. Dance-style and competitive cheerleading, both recent imports from the United States, have been growing in New Zealand since the 1990s.

Marching as a competitive sport for girls and women was invented in New Zealand. It evolved from military-style marching, and became popular from the late 1920s. Teams of women competed in matching uniforms, with elaborate and highly synchronised manoeuvres.

The sport was particularly encouraged during the Second World War (1939–45) by government physical welfare officers. Marching was seen as a useful way of keeping up morale and encouraging physical fitness.

The New Zealand Marching Association was founded in 1945 and the first national competition took place in 1946. Rules were set, and teams came to consist of 10 members, including a leader who issued whistle commands. Teams are judged for their marching but also on their uniforms. Uniforms include short skirts, elaborate hats, decorative cords, white boots and gloves.

Marching was most popular in the late 1970s and early 1980s when 300–400 teams competed. At first marching was for young women of working age, but later younger girls could also compete. In the 2000s there was also a grade for older women.

There are two kinds of cheerleading, both of which come from the United States. They have become popular in New Zealand since the 1990s.

Competitive or sport cheerleading involves performers of both sexes, and features gymnastic routines including lifts, tumbling and pyramids. Routines are performed to music.

There is no governing body for competitive cheerleading in New Zealand, but there is a national championship competition.

Print the full story
Next: Page 1. The beginnings of marching as a sport Next