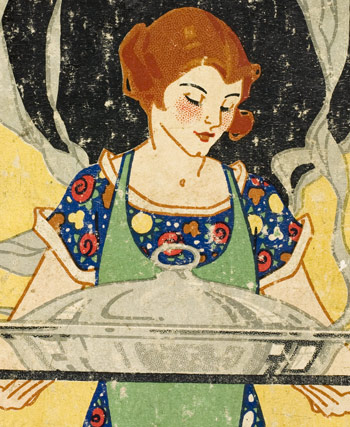 Hefty mutton roasts, overcooked vegetables, gleaming jars of preserves, and cake tins jam-packed with delicious home baking – this was much New Zealand cooking till the later 20th century. In the 2000s cooks were often interested in fresh foods, international flavours and saving time.

Main image: Cover of Melanie Primmer's 1926 book The up to date housewife

Traditionally Māori cooked in a hāngī (earth oven), or over a fire.

The first Europeans in New Zealand cooked outdoors over open fires. Later they used Dutch or camp ovens (lidded pots on legs) and colonial ovens (cast-iron boxes with a fire heaped over).

In the 1850s cast-iron ranges were installed in some houses, but they smoked and dropped soot because of New Zealand’s soft coal. In 1873 Henry Shacklock designed the Orion range to work with local coal.

Gas stoves were introduced in the 1860s after coal gasworks were set up in cities, and electric stoves arrived in the 1920s. Their temperature gauges made cooking more accurate.

Settlers brought recipes with them in published or handwritten cookbooks or in their heads. New Zealand’s first proper cookbook was published in 1887. Later, cookbooks were written to suit New Zealand tastes and climate. The Edmonds cookbook first appeared in 1908, and is still a best-seller.

Cooking at home has mostly been done by women, who learnt by helping their mothers. Girls were also taught to cook at school.

As more women took up paid work from the 1960s, they cooked less time-consuming dishes.

Single men cooked for themselves. Men who worked in isolated areas – such as hunters, gum diggers or sawmillers – also cooked. Barbecues were introduced in the 1950s, and men often did the barbecueing.

Print the full story
Next: Page 1. Cooking technology Next