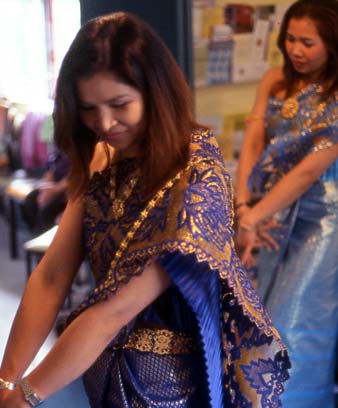 Thai immigrants leave behind the congestion and non-stop noise of Bangkok, but have to adjust to urban New Zealand’s comparative quiet and emptiness. Sustaining them far from home are aspects of an ancient culture – including music and dance, temples, ceremonies and festivals – which is steeped in Buddhist beliefs.

Getting an education and learning English are major reasons why Thais come to New Zealand. Students were among the few early arrivals and, along with other young Asians, from the 1990s they began pouring in around the country. In 2013 their numbers reached 8,052. Moving from big, bustling Bangkok is a shock for many Thai immigrants, who find New Zealand centres very empty.

Of those Thais who settle, most choose to live in Auckland and Wellington. In 2013 about half worked in sales, service and manual jobs. There are many more Thai women than men in New Zealand.

The Buddhist religion is at the heart of the community. Temples have been built in Auckland, Wellington and Christchurch, for religious and social gatherings. Christchurch’s 300-strong group celebrated the Year of the Goat in April 2003, although the weather was too cold for the custom of throwing water. Buddhist monks, with their shaved heads and orange robes, arrived from Thailand in the 1990s. Living without possessions, they play a central role as spiritual leaders, teachers and advisers.

New Zealanders can join in events such as the Loy Krathong Festival in November. Lotus-shaped vessels made of banana leaves are floated in a pool of water, to bring good fortune for the new year. Kiwis are enthusiastic about Muay Thai (kick boxing), and there are boxing gyms and trainers throughout the country. And with the booming popularity of Asian cuisine, there are numerous Thai restaurants serving green and red curries, and other pungent, spicy dishes. Special food stores sell authentic ingredients such as lemongrass and shrimp paste.

But for Thai immigrants, like so many others, settling in and putting down roots involves losing something of their original culture and identity. As the young Christchurch artist Waroonwan Thongvanit commented, ‘it is still at times hard to be Thai in a country which has become my home.’

Print the full story
Next: Page 1. Leaving Thailand Next