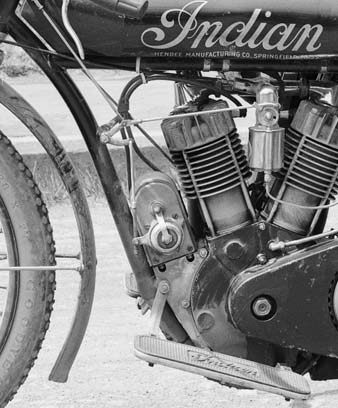 From Burt Munro and the ‘world’s fastest Indian’ to John Britten and his Superbike, New Zealanders have a history of building and customising motorcycles. Although motorcycle riders have sometimes been associated with gangs and youthful rebellion, today’s leather-clad Harley-Davidson rider may well be a middle-aged urban professional.

Motorcycles were invented in the late 1800s, when people started putting engines on bicycles. The first motorised tricycle was brought to New Zealand in 1899, and people began to build their own motorised bicycles.

Sidecars were added to bikes, and could carry a passenger or tools. Motorcycles were cheaper to buy and run than cars, so they were popular with travellers and tradespeople, including butchers, bakers and plumbers. Mary Watson of Marlborough used her sidecar to carry a washing machine to farmhouses to do their laundry.

At first, most imported motorcycles were from the UK, with some from the US. From the 1960s, Japanese brands like Honda, Suzuki and Kawasaki became more popular.

Early on, motorcycles were raced on beaches, and on grass tracks at horse racecourses. From the 1920s, dirt-track racing (speedway) began. Motorcycles are also raced on roads and off-road tracks.

Many New Zealanders have built or customised motorcycles. They include:

In the 1950s, young men who parked their bikes outside milk bars were known as ‘milk-bar cowboys’. Some got in trouble for racing on city streets. It was unusual for women to ride motorcycles, but some rode pillion (sitting behind a male rider). Motorcycles became associated with rebellion and gangs.

Today, many people belong to clubs and enjoy riding their motorcycles in groups.

At first, people worried that motorcycles would scare horses. Riders were fined for speeding or riding on the footpath. Later, riders and passengers had to wear helmets.

Riding a motorcycle is much more dangerous than driving a car. In an accident, a rider is protected only by their clothes and helmet – so they often wear heavy leather clothing. In 2007, less than 3% of New Zealand’s vehicles were motorcycles, but 10% of people killed on roads were bike riders.

Print the full story
Next: Page 1. History of motorcycles Next