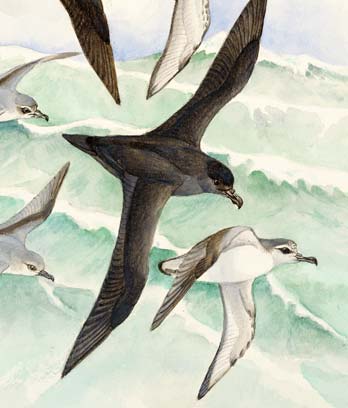 Petrels are remarkable birds. Most spend their lives at sea and come to land only to breed. Storm petrels appear to walk on water while they catch their food. They are as light as 20 grams, while albatrosses weigh as much as 11 kilograms. And petrels live longer than most birds.

Shearwaters, prions, storm petrels, diving petrels and albatrosses all belong to a group of seabirds known as petrels. Some are tiny: the smallest storm petrels weigh only 20 grams. Albatrosses, the world’s largest seabirds, weigh up to 10 kilograms.

Most of their life is spent on the water or flying, and petrels only come on land to have their chicks. Petrels need to fly long distances to find food, so most have long slender wings that they use for gliding.

Petrels have tube-shaped nostrils on their beaks that drain the excess salt from their bodies. Many petrels have a good sense of smell.

Different species of petrels nest in different places: in crevices, on cliff ledges, on the ground, and in burrows that they dig in the earth. Some burrows can be more than 2 metres long, and the birds may use the same burrow for many years.

Petrels lay only one egg each breeding season. Both parents take turns incubating the egg. Hatching takes around 40 days for smaller birds and up to 79 days for albatrosses.

When the chick hatches, the parents protect it for a few days to a few weeks. After that, the parents only come back to bring food. As the chick gets older the time between feeds gets longer. But the meals can be big – chicks can double their weight overnight.

Chicks grow quickly and become heavier than their parents. Many petrels stop feeding the chick before it flies, and it uses the stored fat to finish developing and growing its feathers. When the chick flies out to sea it must learn to feed itself.

Twenty petrel species used to have their chicks on mainland New Zealand, but now only five species breed there. The other 15 species were hunted by predators such as dogs, cats, rats, stoats and ferrets, until none remained.

Many petrels are also accidentally caught by fishing boats.

Print the full story
Next: Page 1. Petrels Next