Story: Men and women in the city 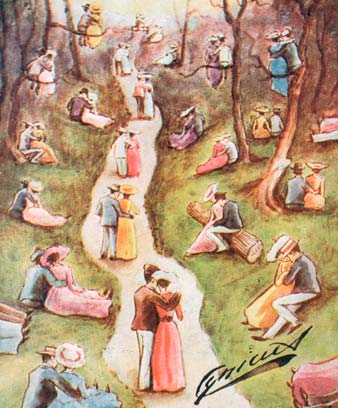 New Zealand has sometimes been called a ‘man’s country’ – but since the 1880s, its towns and cities have been home to more women than men. However, women have had to fight for equal access to city professions and a public presence in the cities.

Men and women, city and country

In the early days of European settlement in New Zealand, women were concentrated in towns and cities. In the 2000s, the urban population still has more women than men. Work in the cities was more varied and less physically demanding than farming, and it was easier for women to meet people and make friends.

By 1911 more than half of all New Zealanders lived in urban areas. Many settled in suburbs. Men were mostly responsible for vegetable gardens and lawns, while women grew flowers. Many men had a backyard shed where they could fix and make things. Few women worked outside the home. They did housework, raised children and joined women’s organisations.

From the 1960s some women increasingly questioned their role as housewives. More women began doing paid work, and more men looked after children.

From the 19th century, hotels, restaurants, men’s clubs and sports grounds allowed men to enjoy themselves. Gay men were drawn to cities, where they formed their own communities. Public bars did not allow women, but in the 1970s women in Wellington and Auckland demanded to be served there.

From the 1880s department stores were built, employing women and selling fashions to women shoppers. Cinemas encouraged mothers at their weekday daytime sessions. By the early 2000s there were few city spaces just for women, although women’s gyms were popular.

In the 19th century a woman walking on her own at night was thought to be a prostitute. Women were sometimes attacked, and from the 1970s ‘reclaim the night’ marches were held asserting women’s right to walk safely at night.

Cities have long provided ways for people to meet partners. People met at dances, cabarets and nightclubs. Gay men and lesbians had their own meeting places, and prostitutes sold sex.

Caroline Daley, 'Men and women in the city', Te Ara - the Encyclopedia of New Zealand, http://www.TeAra.govt.nz/en/men-and-women-in-the-city (accessed 20 May 2022)