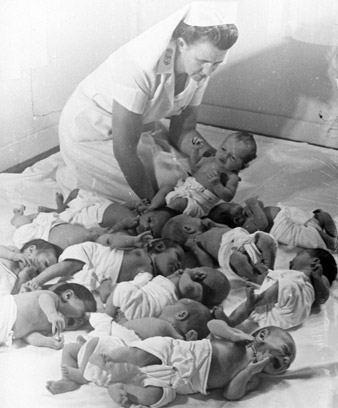 In the 1960s and 1970s many young unmarried women gave up their children for adoption by strangers. Many never even saw their babies, and the process was shrouded in secrecy. Activism by birth parents and adopted children led to a more open situation. By the early 21st century, few New Zealand children were being adopted by people unrelated to them. Most adoptions were of children from overseas or related children.

Story by Anne Else

Māori children were often brought up by relatives who were not their parents, a practice known as whāngai. Usually there was no secrecy, and the children knew their birth parents.

In the colonial period, customary Māori adoptions were legally recognised, but from 1901 they had to be registered with the Native Land Court.

The Adoption of Children Act 1881 meant that people who were willing to take in and bring up children could become their legal parents. At first there were few adoptions.

From the 1940s people thought unmarried mothers should give up their children for adoption, allowing them the chance of a ‘normal’ family life. In the 1950s there were not enough babies available for those who wanted to adopt. But by the mid-1960s so many babies were being given up for adoption that couples had plenty of choice. Newborn girls were most popular. Babies who were not Pākehā, or who had disabilities, were more difficult to place.

The Adoption Act 1955 was based on the idea that there should be a complete break between the birth and adoptive families. Many women whose children were adopted out never saw their babies at all, and very few knew who had adopted them.

The act brought Māori under the same rules as Pākehā – this meant that the tribal background of adopted Māori children was rarely recorded.

Unmarried pregnant women were seen as bringing shame on themselves and their families. Many were sent away to homes for unmarried mothers. They returned home after they had given birth and the child had been adopted out.

From the 1960s more single mothers began keeping their babies. The Domestic Purposes Benefit for sole parents was introduced in 1973, and single motherhood became less shameful. Contraception also became easier to get, and by the mid-1970s there were complaints about a ‘shortage’ of babies for adoption.

From secrecy to openness

Adult adopted children began campaigning for the right to know about their birth families, and some birth mothers wanted to know what had happened to the children they had given up for adoption. In 1985 the law changed so they could find out about one another.

Adoption in the 21st century

In the 21st century few children were adopted by strangers. Open adoption, where the birth and adoptive families meet each other, was encouraged, and most birth mothers could choose the family their child would go to.

Because so few children were available, there was interest in adopting children from overseas – including from Romania and Russia.

Some people considered that adoption law needed to change, either because it did not pay enough attention to the rights of the child or the birth family, or because it discriminated against particular groups of people.

Since the legalisation of same-sex marriage in 2013, married same-sex couples have been able to adopt children. In 2015 a High Court judge ruled that the phrase 'two spouses' in the Adoption Act 1955 included same-sex de facto couples, not just married couples. However, calls for change in adoption law have intensified. The Human Rights Review Tribunal ruled in 2016 that sections of New Zealand adoption laws were discriminatory and outdated.

Print the full story
Next: Page 1. Māori and colonial adoption Next