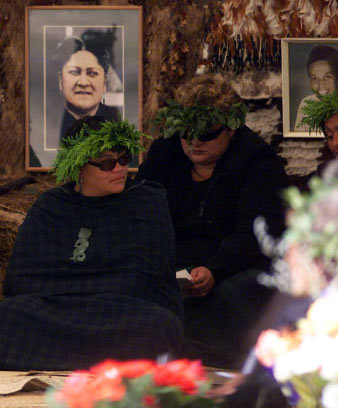 The tangihanga is the enduring Māori ceremony to mourn the dead. The body lies on a marae and people come to pay their respects. Tangi retain traditional practices which have changed little despite European influence.

Weeping over a deceased chief

Tangi over a woman

The tangihanga ceremony which Māori use to mourn the dead has changed very little over time. The body is prepared by an undertaker, then taken to the dead person’s marae. Visitors are welcomed and speeches are made. After the body is buried at the urupā (cemetery) a minister or tohunga walks through the dead person’s home to remove the tapu of death. Sometimes a photograph of the person will be taken to another marae so people who could not attend the tangi can mourn the death.

Hine-nui-te-pō was the goddess of death who Māui attempted to crawl through in order to end death. He failed, and humans continue to die.

Death is also personified as Aituā.

A rangatira about to die would deliver an ōhākī, a final speech to the tribe which often reminded them of revenge to be taken on other tribes.

A dead person’s body was smeared with red ochre and oil and put in a sitting position with the chin resting on the knees. They were wrapped in mats and cloaks.

Speeches were addressed to the dead person as if they were still alive.

The whānau pani (bereaved family) were expected to stay with the tūpāpaku (corpse) and not eat. People wore wreaths of greenery on their heads.

The body was buried and later retrieved. The bones were scraped clean and painted with ochre. Tohunga hid the bones so the dead person’s remains could not be desecrated.

Nowadays the body is in a casket which lies on the marae, in the wharenui, on the porch or in a separate house.

The whānau pani can eat at the end of the day when no more visitors will arrive.

People are encouraged to express their emotions. Sometimes there are arguments over where the body should lie. These are considered a tribute to the mana of the dead.

Print the full story
Next: Page 1. Understanding tangihanga Next