In the 19th and early 20th centuries, thousands enjoyed New Zealand’s mineral hot springs, whether taking nature’s cure for rheumatism, or simply seeking relaxation. Modelled on European lines, the fashionable spa was promoted as a fountain of health. 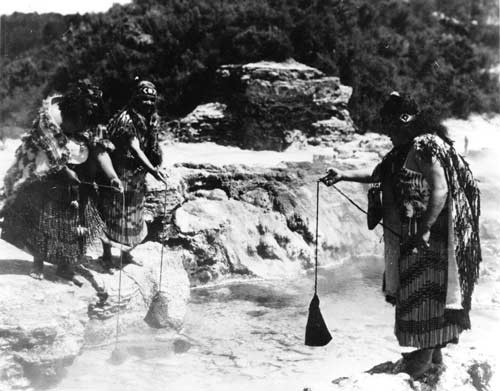 What is a thermal pool?

A thermal (hot) pool or spring forms when rainwater seeps down through rocks to the earth’s hot zone, where it gets heated. Then it bubbles up to form a pool, containing minerals dissolved from the rocks. Sitting in the water helps some people with medical problems.

Where are New Zealand’s hot pools?

The most famous hot pools are in the Taupō volcanic zone, which includes Rotorua. There are others around the country, including Te Aroha, and Hanmer in the South Island. Some are hidden in native bush. At Hot Water Beach, Coromandel, you can dig your own pool in the sand.

Māori people used springs for cooking, bathing, washing, and treating ailments. European settlers also enjoyed the springs, and they built bathhouses and sold the water in bottles. But they often made Māori use separate pools.

In the 19th century in Europe, spas (health resorts built around natural springs) were very fashionable. The New Zealand government copied this idea, for two reasons: to treat medical problems, and to attract tourists. From 1880 they built big spas at Rotorua, Te Aroha and Hanmer Springs. Visitors soaked in the pools and enjoyed the tea rooms, bowling greens and beautiful gardens.

People hoped that bathing in or drinking the waters would cure problems ranging from arthritis to insomnia. Invalids were given massage, and some strange-looking treatments with electric wires. Later there were also spa hospitals, such as Rotorua’s Queen Elizabeth Hospital, which still treats rheumatic diseases.

Some waters contained gases and bugs that caused illness and even some deaths.

Many spas and baths have been restored, and thousands of Kiwis and tourists visit to bathe or have massages. And you can still buy Lemon and Paeroa drink (L&P), a mineral water first bottled in 1907 at Paeroa, on the Hauraki Plains.

Print the full story
Next: Page 1. A valued resource Next