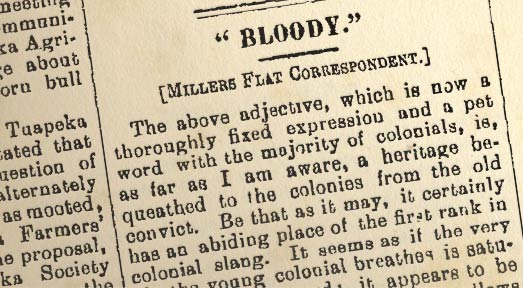 New Zealand’s farming heritage has always been a rich source of colourful language. Ewes are sometimes referred to as dollies, grannies and career girls; dogs as powder puffs and flea taxis; and musterers as mutton punchers, dog-wallopers and scree-scramblers.

From the early days of European settlement, rural New Zealanders developed a distinctive vocabulary. New Zealand’s landscapes, plants and animals were very different from Britain’s. Settlers needed new words to describe them, and to talk about life in their new home.

Settlers often used Māori words, sometimes pronouncing and spelling them in an English way, or changing the meanings:

Huts and shelters were often called whare (the Māori word for house).

The rush to settle the land led to the terms land boom, earth hunger, land fever and run-hunting.

Thick forest was called bush, and led to many terms, like bushman (who worked in the bush) and bush telegraph (passing on information by word of mouth). Bush was cleared by burning, so farm fields were sometimes known as burns.

Farmers were sometimes called cattle kings, flockmasters and mutton lords. They ruled over butterdoms, sheepdoms, and kingdoms in the hills.

Farming problems led to new words, such as:

Farmers talk about weather in understated ways – calling a drought ‘the big dry’, or a flood ‘the big wet’. Sheep can be so wet that ‘frogs jump out of the wool’, and land can be so dry that ‘rabbits have to take a cut lunch’.

Dairy farmers are often called cow-cockies, from the Australian word cocky (short for cockatoo), or gumbooters after their rubber boots.

Musterers, who herd sheep in the high country, are known as hill men, dog-wallopers, mutton punchers and tussock jumpers.

Shearers who shear roughly are called butchers or smallgoods men.

Print the full story
Next: Page 1. The evolution of rural language Next