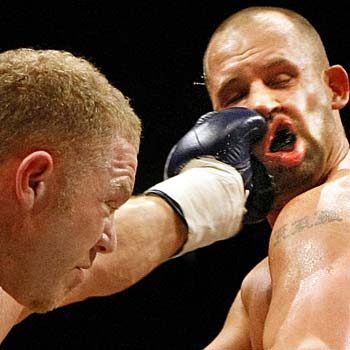 Boxing is a combat sport in which two people punch each other in a square ring according to a set of rules. Boxing can be dangerous, and the New Zealand Medical Association has called for it to be banned.

From the 1990s women as well as men took part in boxing.

The first known organised boxing match in New Zealand was in 1862 in Canterbury. Irish boxer Jack Stagpoole organised matches around New Zealand in the 1870s. English champion Jem Mace set up a boxing school in Timaru and held the first amateur championships there in 1880.

Boxing was a highly popular spectator sport from the 1920s, although crowds became smaller after the 1960s. Tom Heeney and Morris Strickland were successful professional boxers in the 1920s and 1930s. In the 1990s two boxers of Pacific descent – Jimmy Thunder and David Tua – held minor world heavyweight titles.

Amateur boxing is administered by Boxing New Zealand. In 2012 there were 27 local boxing associations.

From the early 1900s boxing was part of the school curriculum for boys, and universities had boxing clubs. However, over time it became less popular, and in the 2000s boxing was not available in schools.

Men’s boxing became an Olympic sport in 1904, but women’s boxing was not included until 2012.

Wrestling is a combat sport in which participants grapple in a square ring, and can be professional or amateur. Professional wrestling is a mixture of entertainment and sport.

The New Zealand Wrestling Union was set up in 1930, and the first national championship was held in 1931.

Wrestling was popular in the 1930s, and huge crowds packed halls to watch wrestlers including New Zealander Lofty Blomfield. Wellingtonian Pat O’Connor won a silver medal at the 1950 Empire Games and was the world professional champion in the US from 1959 to 1961. The wrestling television programme On the mat screened in New Zealand from 1975 to 1983.

Print the full story
Next: Page 1. Professional boxing Next